10,000 supporters put aside rivalries in march to London Bridge 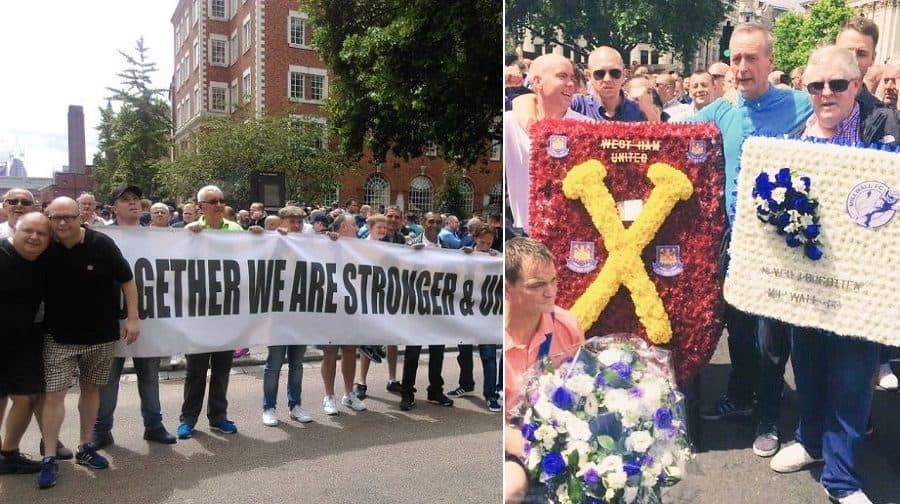 Millwall and West Ham supporters were among thousands of football fans who put club rivalries aside for a march against extremism in London last weekend, John Kelly writes…

An estimated 10,000 people made their way from St Paul’s to London Bridge in a march organised by Football Lads Alliance, a group which started on Facebook and now has more than 30,000 members.

Lions and Hammers fans were photographed together placing their club colours on London Bridge, where on June 3 three jihadi terrorists ploughed a van into pedestrians before launching a stabbing rampage in nearby Borough Market, killing eight.

Millwall supporter Roy Larner made international headlines for fighting off the attackers, and on Saturday fans from a number of London clubs and around the country came together for United Against Extremism.

Millwall season-ticket holder Henry Morgan, 35, a secondary school teacher, was one of those present, and he explained why he took part.

“I heard they had re-opened the Barrow Boy & Banker so went with a friend in solidarity for London Bridge,” he said.

“There were two West Ham Fans there, and one was from Football Lads Alliance.

“When you meet West Ham fans there is always an edge, but he said, ‘I’m going to buy you a drink, we need to unite against this’. That’s such a powerful message.

“He sent out a photo of me and him and it got lots of retweets and likes, so I texted him and said we’d go along. I went with a mate who’s a Chelsea fan.

“If you look at Roy, he acted the way we all wish we could but maybe only one of a few thousand probably would. My perspective is I come from a household that is Labour, but I started becoming disillusioned with Labour and politics in general.

“Then the CPO [of property around Millwall’s ground] came along and these sorts of things politicised me, the corruption in politics, this general frustration, it doesn’t matter if it’s Tory, Labour, Lib Dem. There is that imbalance that means people like me feel they have nowhere to turn.

“I feel politically bereft at the moment, the levels of hypocrisy there.

“How do you get Millwall, West Ham, Portsmouth, Geordies all marching together with no other political motive?  There was a Sikh guy [Mohan Singh] who spoke who got a massive round of applause.

“This is our area, we drink there before games, somebody’s got to do something about this.

“People are talking about another march and making it even bigger the next time.”

Good to see Millwall & West Ham fans come together in a common cause to stand against terrorism & extremism. Well done lads! I’m up for the next march. This is our city, all of ours: Hammers, Spurs, Gunners, Lions, Blues – Black, White, Asian, whatever religions: we all live together, we all stand united against this threat to our cities and the UK. #FootballLadsAlliance

It was a great occasion. Rival fans not only marching together but applauding each other in vast numbers. Something I’ll never forget. Roll on October.