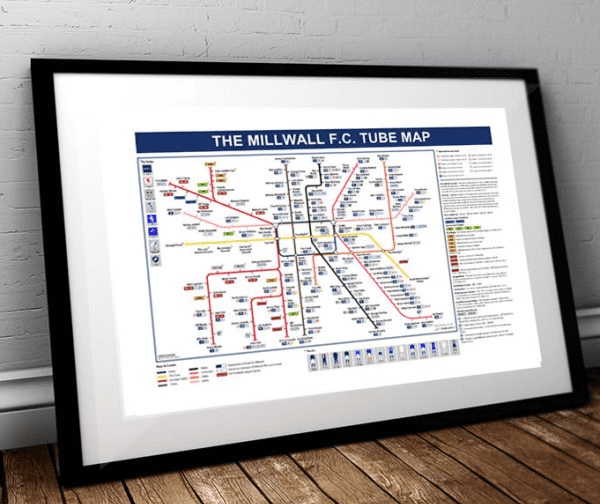 The map depicts the history of the club in underground style

Now you can see the history of the Lions on a Tube line, after the classic maps were redesigned around Millwall Football Club.

The artwork is the brainchild of 52-year-old Mike Coughlan, whose Tube Art business turns the underground network into visual representations of footie history.

Among them are Millwall, with each ‘tube’ line representing a period of Lions history.

The centre line is an “icons” line showing all the club’s all-time great figures, while stops indicate player appearances, goals and promotions.

“It’s a regular tube map but idea is that each line represents a decade in the history of Millwall,” explained Mike.

“It starts from pre-war, through to the fifties and sixties and then all the way up to 2000s. Each line represents a different portion of Lions history

Mike, who formerly worked in human resources, has now redesigned the maps around 37 footie clubs and two rugby clubs, including most of the London teams.

Other clubs included in his designs are big names like Manchester United down to smaller teams like Notts County.

“One of the things I was keen to do is to do maps outside of the usual suspects, so that there’s something for all the supporters of different clubs as well,” he said.

Each intricate design takes around six-weeks to make including all of the research, planning, and drawing.

The idea first came to him when he made a ‘Tube’ map of his home town, Warrington, “as a bit of a joke.” He didn’t expect to sell many, but unexpectedly sold over 120.

“I’ve had an explosion [of interest] from London,” he added. “I think it’s because the original Tube map was designed here.”

Now the Tube Art business is his full-time job since his first design over four years ago. Top players, appearances and promotions all feature on the map

After designing maps around footie teams, he’s now moved onto baseball teams for customers based in the States.

“The next port-of-call I think will be doing American sports as well,” he said. His first US-based design, which he started two months ago, will be popular baseball team, the Chicago Cubs.

Those wanting to get their hands on a Millwall Tube map can find them for sale at www.tubeart.co.uk.

The prints start at £24, and can be ordered in a range of different sizes and with frames.