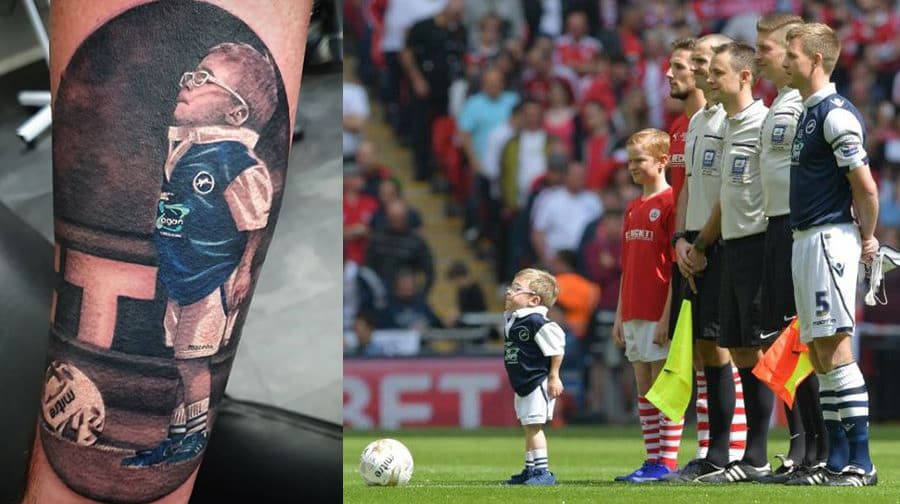 Left: Tattoo of Harvey unveiled by dad Dean; right: the iconic scene at Wembley which inspired it

An iconic photo of Millwall mascot Harvey Brown has been immortalised in ink after his doting dad decided to get it as a tattoo.

Ten-year-old Harvey, a regular sight at The Den, suffers from the ultra-rare Morquio syndrome. It affects skeletal growth, leaving sufferers with weak bones, a tendency to develop heart disease, and worsened vision and hearing.

His dad, Dean, decided last Monday to get the moment Harvey was a mascot for his beloved Lions captured forever on his arm, in a Christmas present from his wife Vikki. “I was nervous about having it done because I didn’t want anyone to mess it up,” says Dean

“Obviously Harvey was a mascot, and people used to say to me, ‘that’s an iconic photo’. And I just thought you know what, I’m going to get that as a tattoo,” said Dean, who lives in Bermondsey with his family.

“It was getting a bit sore but then I thought about Harvey and what he has to go though, so a bit of scratching on the arm is nothing in comparison,” he said.

“I was nervous about having it done because I didn’t want anyone to mess it up. But it’s come out much better than I expected, it’s like having a photo on my arm.” The design behind the tat

Popular Harvey is also doing well, said Dean, despite needing another operation to one of his legs before Christmas or in the New Year.

Dean thanked the tattooist, Sammy Kent of Point 2 Point studio in Erith, for her work – and revealed he might even continue with a full sleeve of tats dedicated to Harvey and the club.

Fans at the club have heaped praise on the tattoo, he said. “People have said it’s the best tattoo they’ve seen. It’s just been crazy, the reception, people can’t believe the details in it.

“Sammy is a Millwall fan herself, so because it was Harvey she put her heart into it, she really did.”