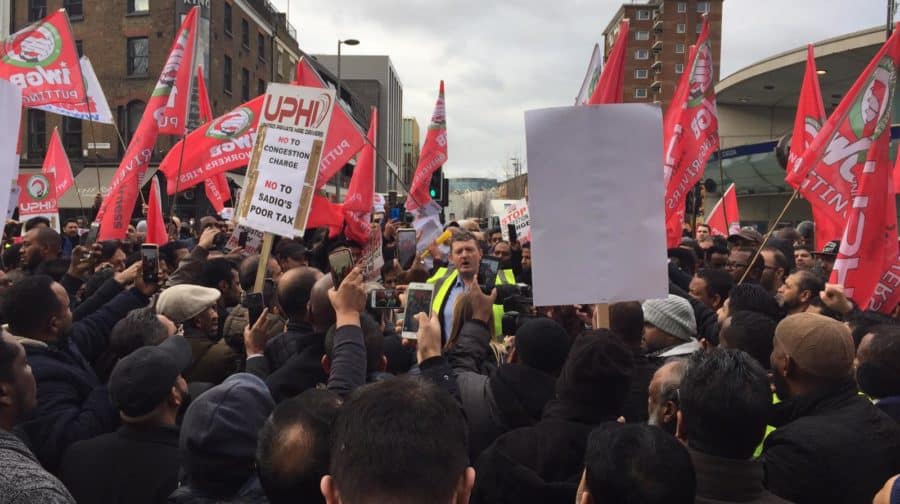 Minicab drivers have vowed to blockade three major London roads this afternoon in a protest against the extension of the congestion charge in April – which they label “a tax on the poor.”

The protest, called by the Independent Workers Union of Great Britain’s United Private Hire Drivers branch, is against the Ultra-Low Emissions Zone, which will come into force on April 8th.

The direct action will see drivers, some clad in yellow vests inspired by ‘gilet jaunes’ protests in France, blockading the Cut, Union Street and Blackfriars Road from 4-6pm.

The Ultra-Low Emissions Zone will mean a £12.50 daily charge for most vehicle types driving into the zone, including many minicabs, which don’t meet low-emission standards.

Yaseen Aslam, Secretary of the IWGB’s UPHD branch, said: “We desperately need effective solutions to congestion and air pollution, but this policy is nothing of the sort.

“All the Mayor’s plans will do is drive minicab drivers further into poverty, leaving them unable to feed their families and struggling to put a roof over their heads.

“Hundreds of drivers are coming out today to stand united against this unjust tax on the poor and we will keep on coming back until we are heard.” Cars will be blockading the Cut, Union Street and Blackfriars Road from 4pm, said the union

The private-hire drivers have promised to continue their dispute with TfL every Monday, arguing for alternative ideas to tackle congestion, including a cap on total minicab licenses and dedicated rest spaces for minicabs.

However TfL has insisted that the “bold action” of the congestion charge is needed to tackle the capital’s polluted air crisis.

“The private hire trade, along with all road users, have a central role in reducing the filthy fumes circulating in our city.

The traffic blockade comes on the heels of a similar protest called by black-cab drivers at London Bridge in November in protest at proposed traffic restrictions around Tooley Street.