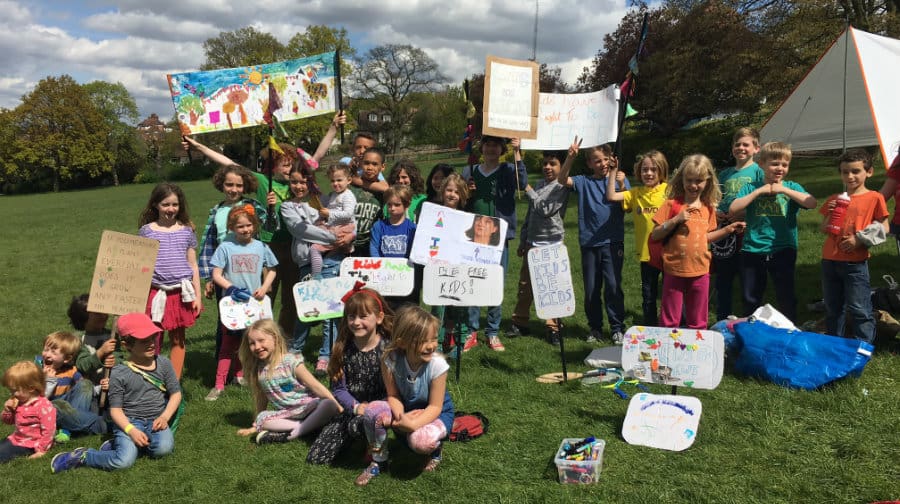 Primary school pupils across Southwark joined protestors around the country by staging a ‘kids’ strike’ on Tuesday, against new government-imposed Sats exams.

Parents and ten-to-eleven-year-olds from Ivydale School in Nunhead, and Fairlawn School near Dulwich, took part in the walk-out, led by the Let the Kids Be Kids campaign.

Steve Rose, a parent of three children among the 140 to miss school from Ivydale, told the News: “It’s reached a point where six-and-seven-year-olds are expected to learn what a subordinating conjunction is – something that would be lost on the vast majority of parents.

“To me it reflects an incredibly narrow curriculum, and to many parents it comes at the expense of better, more joyful learning.

“With [secretary of state for education] Nick Morgan’s policy for making all schools into academies, its looks even more like education is being taken out parents’ and councils’ hands.

can’t think what to do about it. So we held an alternative “fun day of learning” at the Horniman Museum on [Tuesday] morning.”

Similar events were also held around the country and an online petition had gained 47,000 signatures by Wednesday, calling for teachers to boycott Sats exams.

The petition, created by the Let the Kids Be Kids group, said children are “over-tested, over-worked and in a school system that places more importance on test results and league tables than children’s happiness and joy of learning”.

Head teacher of Ivydale Primary School, Helen Ingham, told the News: “While the school is sympathetic with the views of parents about the government’s education reforms and we understand why some parents have decided to take this action, we have made it clear to all parents that school is open as usual on Tuesday.

“Children who are absent from school as a result of this action will be recorded as having an unauthorised absence.”

Steve, a writer for The Guardian, added: “It was short notice, and the idea spread around the country quite quickly.

In defence of the exams, due to continue next week, education Secretary Nicky Morgan said: “To those who say we should let our children be creative, imaginative, and happy – of course I agree, both as a parent and as the Education Secretary.

“But I would ask them this – how creative can a child be if they struggle to understand the words on the page in front of them – they certainly can’t enjoy them? What are the limits placed on a child’s imagination, when they cannot write down their ideas for others to read?

“That is why the campaign being led by some of those who do not think we should set high expectations, who want to ‘keep their children home for a day’ next week, is so damaging.”