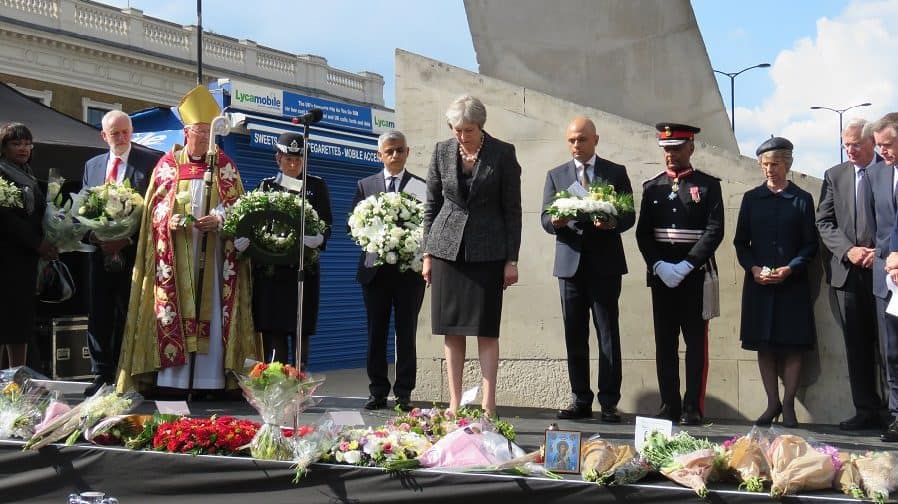 Theresa May bows her head in remembrance at Southwark Needle

Theresa May, Jeremy Corbyn and Sadiq Khan held a minute’s silence in Southwark today in remembrance of the victims of the London Bridge terror attack.

Today is the one year anniversary of the attack of June 3, 2017, which saw three armed terrorists drive into pedestrians on London Bridge before entering Borough Market and attacking people at random with knives.

Eight people were killed that night and dozens more injured, including brave members of the emergency services, both on and off duty.

At 3pm today a special commemoration service was held at Southwark Cathedral for those affected by last year’s events, and their families. At the private ceremony, candles were lit for each person who died that night, and one for all who were harmed.

An olive tree, described as a “tree of healing”, was then planted in the cathedral grounds using compost made from floral tributes left on London Bridge in the aftermath of the attack.

Those who attended the service then marched in a procession from Southwark Cathedral to Southwark Needle, the monument at the corner of London Bridge to Duke Street Hill.

Prime Minister Theresa May joined the Bishop of Southwark Christopher Chessun, as they walked past crowds of hundreds of well-wishers who had gathered carrying flowers and waving ‘London United’ placards. They stood with Home Secretary Sajid Javid,  and Labour shadow home secretary Diane Abbott, and the Bishop of Southwark.

A minute’s silence – observed across the nation – was introduced by Peter John. In a formal statement published today, Theresa May said: “The attack on London Bridge and Borough Market was a cowardly attempt to strike at the heart of our freedoms by deliberately targeting people enjoying their Saturday night with friends and family.

“Today we remember those who died and the many more who were injured, and also pay tribute to the bravery of our emergency services and those who intervened or came to the aid of others.

“The many stories of courage demonstrated that night will always stay with me – such as Ignacio Echeverria, who died after confronting the terrorists with the only thing he had, his skateboard, and Geoff Ho, who spent almost two weeks in hospital after being stabbed in the neck as he shielded his friends.

“Among the eight people who were tragically lost that night were seven foreign nationals, from four different nations. This is a reflection of our great cosmopolitan capital, whose energy and values brings together people from across the world, and a tragic reminder that the threat from terrorism transcends borders and impacts us all.

“My message to those who seek to target our way of life or try to divide us is clear – our resolve to stand firm and overcome this threat together has never been stronger.”

Families of the eight people who died, people who were injured, first responders, and members of the public were invited to lay their flowers at the Southwark Needle monument, which will be left in place for several days so the public can also pay their respects.

Throughout yesterday and today, a ‘London United Book of Hope’ has been in place in Southwark Cathedral, where people can leave messages of condolence and hope.

On Tuesday June 19, the book will return to City Hall, as part of a series of events to mark the anniversaries of each of the four terror attacks that hit London last year.

As the News reported this week PC Wayne Marques, who fought all three attackers with just his baton and was left temporarily blinded in one eye, has been honoured with a permanent tribute in Southwark Cathedral in the form of a hand-carved stone corbel.

Londoners have shared their own messages throughout the week, with Transport for London penning this tribute:

For London: #LondonUnited Thinking of the people who lost their lives, everyone affected by the events and the heroes who run towards the danger one year ago today at London Bridge. @allontheboard #LondonBridge #BoroughMarket #London #WeStandTogether #WeAreLondon pic.twitter.com/vFyhA23bnM

In a video message published on Friday, Sadiq Khan said that London has stood united against terrorists:

This weekend, we come together to honour the innocent victims of the London Bridge terrorist attack, who will forever remain in our hearts and we pay tribute to the heroic efforts of emergency services, who ran towards danger while urging others to safety. #LondonUnited pic.twitter.com/fVIvWj9wOf

Peckham police’s PC Jim Cole, who was one of the first officers on the scene and helped dozens of people to safety in a basement bar, tweeted:

I am thinking a lot tonight about what I saw 12 months ago at #BoroughMarket. Thinking of the people killed, injured & the tremendous bravery of the men & women I work with who put themselves at risk to save others. #Proud #LondonUnited #LondonBridge

I’m an American from Colorado. My daughter and I were with a group touring London and happened to arrive at the commemoration of the attack just as the ceremony combined. We were all moved at the unity, love, and diversity of the ceremony. The number of “turn to love” and “Muslims against Isis” is something that never seems to make it into the media in the US, so I share pictures from that day with whoever I can. It is inspiring to see a country that knows how to unite during difficult times. I wish and hope that we may do the same.