'Everyone says that Mishi was a legend. He absolutely was. People use it far too readily, but he was' - Mishi's brother, Ferenc 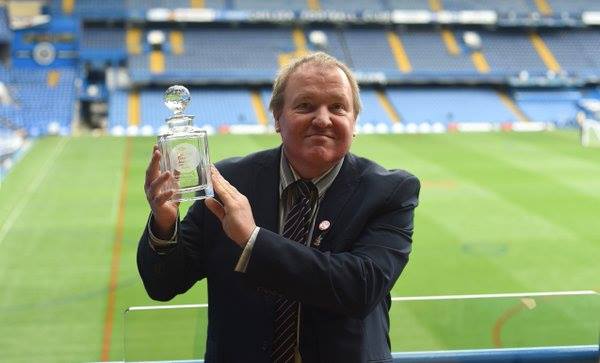 With DHFC's community team of the year award, one of Mishi's proudest moments in life, says Ferenc

Dulwich Hamlet superfan Mishi Morath made his final visit to Champion Hill last week as his funeral carriage arrived at his beloved club decked out in pink and blue.

It was a fitting send off on Wednesday for the number one rabble rouser, who dedicated his life to the club and was a giant in the non-league football community.

Two white horses drew his Hamlet-themed coffin to the football ground as friends and the DHFC community lined the road to pay their respects to the well-loved librarian, poet, and Hamlet fan. Later in the afternoon, his funeral service was held at Honor Oak at 4pm, before a packed public wake was hosted in Hamlet’s clubhouse.

As the News has reported, tributes have poured in for Mishi, who died on December 20 at just 53.

Speaking to the News, Mishi’s elder brother, Ferenc Morath, said on behalf of the bereaved family: “I was really shocked by how loved he was. It has been a wonderful salve for us to know just how loved.”

Mishi grew up in the East Dulwich Estate as the youngest of four, two boys and two girls, born to an Austrian mother and Hungarian father, refugees who fled after the 1956 revolution.

Dulwich Hamlet was a family affair, with two of Mishi’s nephews playing for Hamlet teams, and his dad and brother both big fans.

It was Ferenc who took him to his first ever Dulwich Hamlet match: “Straight away he loved it,” he remembers.

“Mishi was quite small and shy as a child but as he got older came out of himself.”

Ferenc describes his brother, a supporters’ team player, as a “terrible footballer but he tried his heart out. He didn’t really play a set position, we just told him where to go”.

Mishi organised the team’s trips to play all over Europe from Finland, to Italy, Germany and many others, and over the decades became more involved in the club, its supporters, and its direction.

“He always loved the camaraderie and the way he could meet so many new people through the club,” says Ferenc.

“His big thing, his absolute joy, was that it became such a community team and was so inclusive with all the work around anti-homophobia, and anti-racism.

“The fact that someone with mental health struggles could have a few hours there and be welcomed and supported – it meant so much for him. His work with the club was decades’ worth.”

We said goodbye to a Hamlet Legend this week.

Mishi came out to his brother in the mid-80s, but never told their parents about his sexuality.

“He had been so worried about what his friends would think and people at football, and then none of them gave a monkeys,” Ferenc remembers.

He believes struggles with his sexuality may have contributed to a chronic alcohol addiction that could have cut his life far shorter.

“Mishi stopped drinking at 35, when he started going to Alcoholics Anonymous meetings. He had to do something or he was going to die. Last year he had been sober for eighteen years.”

Although Mishi and Dulwich will always be mentioned in the same breath, he was also a huge supporter of Streatham Ice Hockey and Ruby League’s South London Storm.

Outside sport, his career was built on a love of reading and, more recently, he had branched into poetry.

“Mishi was a real artist. He loved photography and took pictures of all his travels and, of course, hundreds of football photos, but the poetry was something he took up quite recently,” says Ferenc.

“He always loved reading and working with children to encourage them to read, and in the libraries meeting older people so he could learn more about local history and what Southwark used to be like.” That identity as working class was hugely important to him. A life-long socialist and Labour party member, he had been an active campaigner in the ‘80s and ‘90s, including supporting the miners.

“He found that poetry was the best way to express himself. He regarded his poetry as being honest, and really told it how it was,” says Ferenc.

“Sometimes poetry can be very pretentious but he really expressed the ordinary. And he could talk about some of the things that had affected him.”

In the last year Mishi’s health had declined. He was hospitalised in February 2019 after a heart attack while at a football match in Chatham.

“It was an army team playing and when he collapsed a soldier gave him the kiss of life. He’d have died without the CPR.”

Mishi was laid up in hospital for a month but made a recovery. The same year he was back in the ward after having a toe amputation due to complications from diabetes.

Despite the setbacks, Dulwich Hamlet’s successful return to Champion Hill, first televised game, and the prospect of a new ground, along with all the club’s ever-expanding community work kept him excited about what was to come.

He suffered a second heart attack while at a funeral on December 9.

Doctors operated, believing the procedure had gone well, but he never recovered, and died on December 20.

There has been an outpouring of support and memories shared. In a statement after news of Mishi’s passing, the club described its loss as “immeasurable”.

How would Ferenc describe his little brother? “Everyone says that Mishi was a legend. He absolutely was. People use it far too readily, but he was.

“He was a wonderful, caring individual. He would give his time to everyone, just the way he would welcome everyone to the club showed that. He loved life and wanted people to share it with.”