The coffin is pink and blue 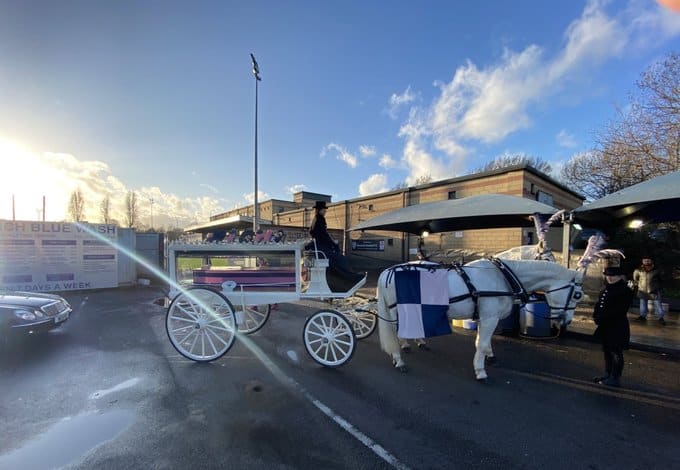 Hamlet through and through: Mishi's coordinated coffin Credit: DHFC

Mishi Morath made his final visit to Champion Hill today as the funeral carriage arrived at his beloved club.

The sun was shining as two white horses drew his Hamlet-themed coffin to the football ground.

Friends and the DHFC community lined the road to pay their respects to the well-loved librarian, poet, and number one rabble rouser.

Mishi’s funeral begins at around 4pm this afternoon, with a wake following the service.

The wake is expected to start from around 5.15pm at Dulwich Hamlet’s club house, with all welcome.

Saying farewell to Mishi, who had been honoured with The Liberty of Old Camberwell last year. On behalf of @SouthwarkMayor. With the heartfelt condolences of the whole borough. @DulwichHamletFC
Please donate in his memory to @dhfc12 and @TheBHF #DHFC ?? #DoTheRightThing pic.twitter.com/zyz1Ew8ivT

Had to be done, before we say our goodbyes to ‘Mr Dulwich’ @DulwichMishi

RIP my friend. We will never forget you ?? pic.twitter.com/B0SIms6Z7P