'Aldrin has always come home in the evening' 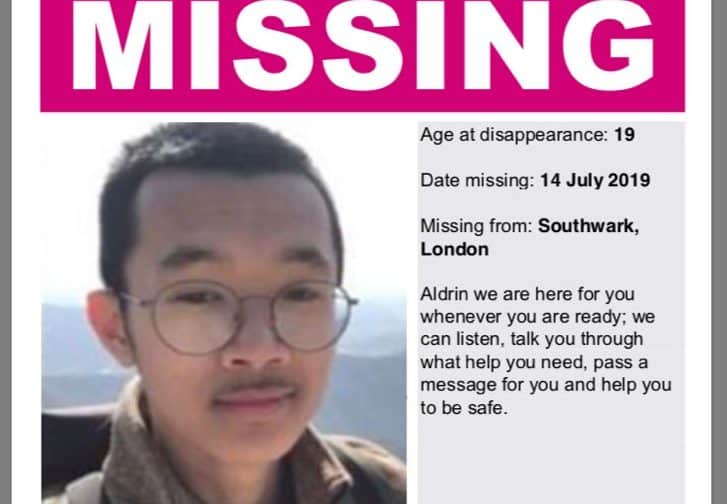 The mother of a missing nineteen-year-old art student from Canada Water has pleaded for News readers to help find her son after he disappeared over a week ago, taking just his keys.

Forty-four-year-old nurse Grace Carlos has been devastated since her only child Aldrin, vanished from their home on Plover Way.

Grace last saw him on the night of Sunday, July 14, when she wished him goodnight and went to bed at around 10pm.

The following day, she realised he had left the house without his phone and wallet and without leaving a message.

Initially thinking he must have gone for a walk or run, Grace became increasingly panicked as the hours went by with no sign of him or news from his friends.

On Tuesday, she filed a missing person report with police, but so far there have been no reported sightings or leads.

Aldrin, a Fine Art student at City and Guilds London Art School in Kennington, who has been living at home with Grace while studying, has never gone missing before.

Grace said: “There was no indication before he went missing, he was completely normal.

“I feel so helpless, I have already circulated posters around the local area and contacted his college, friends and martial arts classes.

“Although I have people praying, I need more than prayers.

“I need action, and help to get more leaflets out. I’m so worried.”

She describes Aldrin as a quiet young man who has never been in trouble: “He is an artist and is quiet, and likes quiet places. He does yoga and martial arts, and is a vegan, and cycles to Kennington every day in term time.

“He is interested in Buddhism, doesn’t smoke and doesn’t drink or go out to clubs at night.

“Aldrin has always come home in the evening, and I’ve met his friends who are a good group of people.”

Grace is asking people to share the poster on social media with the hashtag #aldrincarlos #findaldrincarlos to reach as many people as possible.

Anyone with information should call police on 101 or the charity Missing People, confidentially, on 116000