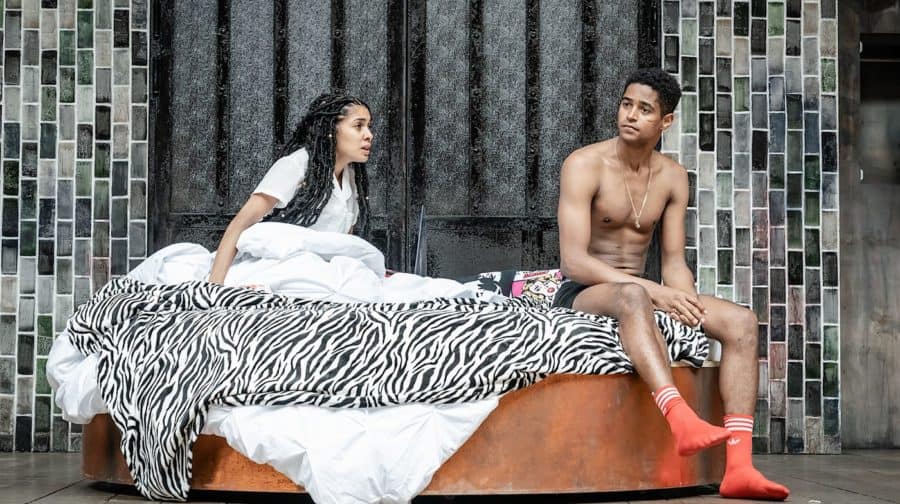 From the opening moments of Ola Ince’s production of Romeo and Juliet at the Globe it is clear that this is not going to be the usual visit to Verona, writes Elizabeth Carlin.

Raucous music plays as the cast march onto the stage and settle in chairs to listen to Mercutio (Adam Gillen) deliver the familiar opening lines. Nothing else is familiar and we realise, as the cast rise and begin to move around and introduce themselves to the audience, that this is a very different approach. On the balcony above the action and below the band a visual display shows changing messages which relate the action we see to a sociological statement or fact or statistic. Crime, we are told, is related to deprivation and poverty but rather than addressing these issues the Duke, finding warring gangs of Capulets and Montagues, simply issues threats. 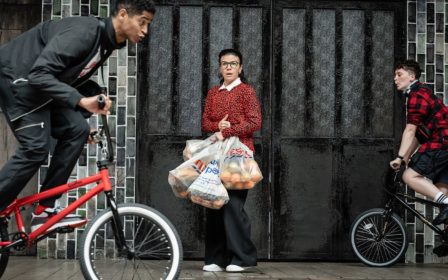 Romeo (Alfred Enoch) is depressed, we are told, as he talks to Benvolio (Zoe West), and as Capulet (Silas Carson) discusses with Paris (Dwane Walcott) the possible marriage to his nearly 16-year-old daughter Juliet (Rebekah Murrell), and Lady Capulet (Beth Cordingly) is sent off to prepare her, the display tells us that patriarchy is a system where men hold all the power. Juliet’s chamber is identified by the large bed which is rolled on and off as required, and Juliet enters her room kick-boxing to be met by the nurse (Sirine Saba) and Lady Capulet to be told she will be introduced to her future husband at the feast that night. She, obedient and childlike, promises to have a good look.

Moving to the Montague boys under the banner ‘when boys are taught the laws of patriarchy, they are forced to deny their feelings’, who, cycling around Romeo, try to cheer him. Again, raucous and strange music is playing as Mercutio delivers the Queen Mab speech and this scene runs straight into the ball. Characters and musicians emerge colourfully dressed from backstage, Juliette in a ballet dress, Paris in shining armour, everyone racketing around looking for ‘the bag’. Then Romeo sees Juliet and everything stops for them except the party goes on and the nurse introduces Juliet to Paris and he sings her a love song, which is played on the screen like karaoke! The audience laughed! As the lovers slip away, Capulet is left drunk on the stage.

The direction is very imaginative. Romeo shins up ladders at both sides of the sudatorium during the balcony scene played under the maxim, ‘Love is a matter of life and death for young people who don’t have a secure attachment to a guardian’: Friar Lawrence is introduced tending his greenhouse under the statement that nearly all of the youth clubs in London have closed and young people have nowhere to go. And the adage ‘it is dangerous for women to go out alone’ gets a very chilling contemporary edge when the nurse is abused as she tries to deliver her mistress’s message to Romeo.

In a very affecting fall of rose petals and showers of bubbles, the wedding takes place under the words: ‘The rational part of a young person’s brain is not fully developed until 25’. And from then on, it’s downhill all the way. Mercutio is killed by Tybalt (Will Edgerton) who is killed by Romeo. Juliet is desolate, (75% of children with mental problems are not receiving treatment). Friar Lawrence the only reliable mentor, (Emotional neglect is a killer) persuading Romeo to have patience and providing Juliet with her potential escape from marriage to Paris. Her tomb, when wheeled on, is a bower of flowers and the grief of all is palpable – a very effective scene. (The loss of one of those close to us is the main contributing factor to suicide) As Paris mourns, Romeo arrives. Paris has a gun but Romeo dodges the bullet and kills him. Seeing the dead Juliet, he takes poison and dies a gruesomely realistic death at centre stage before Juliet, on waking, shoots herself with Paris’s gun. Brutal.

In a supremely effective ending, the excellent band play a dirge as everyone reassembles on stage. A wonderful trumpet sounds as the cast add a mournful chorale. Paris comes to the front of stage and delivers the closing lines.

This production is very different. It’s a bold attempt to reimagine the plot for a contemporary audience and make it accessible and relevant. In this attempt the excellent performances and lively action assured success.