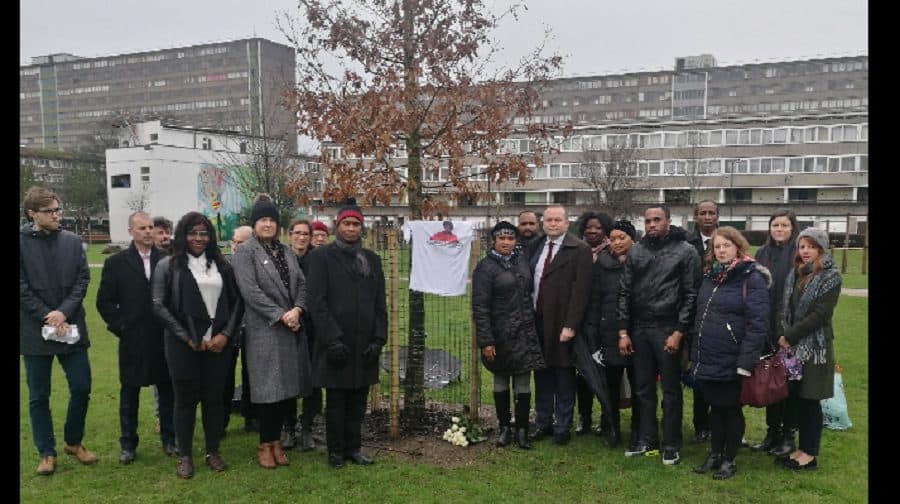 The family of a murdered Walworth teenager gathered at Surrey Square Park on January 16 to mark the planting of an oak tree in honour of his life, writes Kirsty Purnell…

Mohamed Dura-Ray died of multiple stab wounds on Newington Estate in September 2015. His killers are still at large.

With the support of Southwark Council and developers Lendlease, the oak tree memorial has been planted in the park. “It was a really, really special occasion,” said Ms. Noble. “It was poignant and it provided an opportunity for the different representatives of Mo’s life to come together and remember him.”

“We really wanted a tree because trees symbolise growth and strength,” She said. “The tree is also a reminder that Mo’s killers still haven’t been found and that we must promote the message that violence is not something that we want for our children and community. We must work together.”

Mr Coyle said: “Mo’s life was tragically and brutally ended before it had been lived to its full potential. The tree is a living memory of his life, a place of sanctuary and remembrance for Mo’s family and friends and is thankfully close to his former home,” he said.

“It will also act as a reminder that justice is not yet done. His killer remains unprosecuted. More must be done to end youth violence and knife crime especially but the issue was missing from the Home Office strategy and police resources are already over-stretched after years of cuts to budgets that have undermined services, left no one better off and distracted form the needs of our community,” said Mr Coyle.