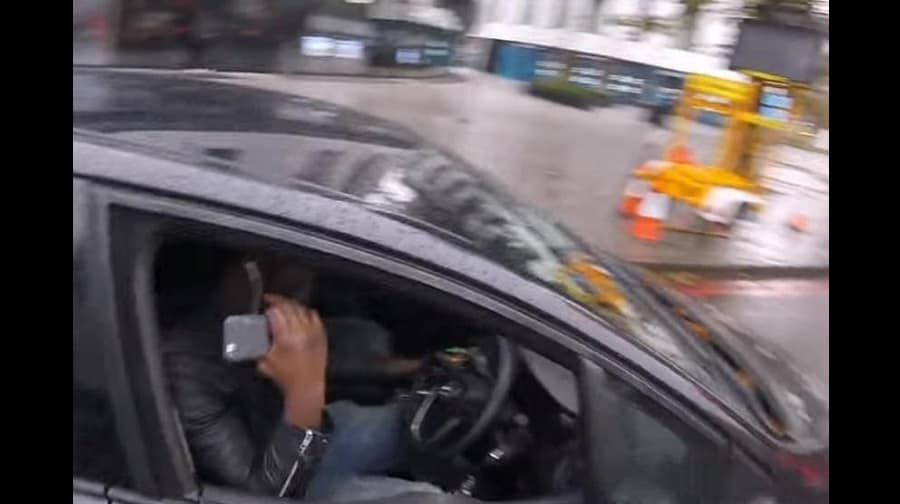 Police are hunting a driver who was filmed using a cycle lane in Elephant and Castle while using three phones at once.

Footage was published online by a cyclist who spotted the brazen driver approaching the junction from Walworth Road on November 21.

Cyclist Silvio Diego, who uploaded the viral video to his YouTube channel, told the News: “I will be [happy] for this driver to be punished and prosecuted.

“But I would feel a lot better if police changed their attitude towards mobile phone use. At the moment everyone does it.”

The video shows the driver of a black Vauxhall using headphones plugged into one device while handling a mobile phone in his right hand – and another phone in his left hand.

“During my commute I see many drivers on their mobile phones, but this guy really takes the mickey, three devices! One in each hand and one on his lap, possibly listening to music.

“To top that up, he drives dangerously around cyclists while using a bus lane, which he’s not allowed [to use].”

Since 2003, driving whilst using a phone has been punishable by an automatic fixed penalty, with three points added to the driver’s licence and a £100 fine.

You can get an automatic fixed penalty notice if you’re caught using a hand-held phone while driving or riding. You’ll get three penalty points on your licence and a fine of £100.

A Met Police spokesperson told the News: “Police received an allegation of a road traffic offence via the Metropolitan Police’s online reporting system on Sunday, November 28, including a YouTube link showing footage of the incident.

“The offence took place on the Elephant and Castle [junction] on November 21 at 9am.

“The footage has been viewed and enquiries continue.”