Moped gang who stole £50,000 worth of mobile phones in south London raids jailed after being caught in Peckham 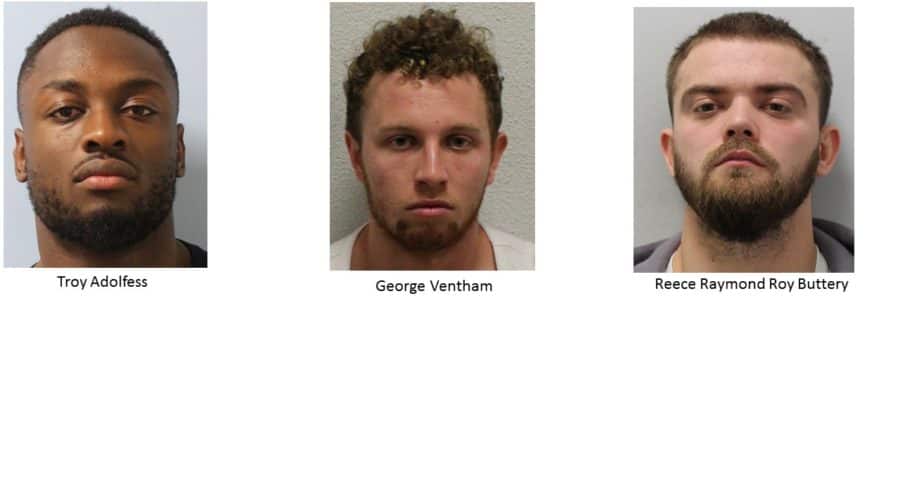 A moped gang who stole thousands of pounds worth of mobile phones all over south London have been jailed after being caught in the act during a Peckham burglary.

Seven shops were targeted during the two-week moped crime-spree in August 2018, with the three men stealing more than £50,000 worth of mobiles in total.

The trio – Troy Adolfess, 24, of Hamilton Road, Thornton Heath; George Ventham, 23 of Carshalton Road, Sutton; and Reece Raymond Roy Buttery, 23, of Knights Hill have all been jailed after pleading guilty to committing burglary.

Adolfess and Buttery were sentenced to two-and-a-half years each after a trial at Inner London Crown Court.

Ventham was jailed for two-and-a-half years plus a further eight months for possession with intent to supply cannabis. Ventham was also jailed for possession with intent to supply cannabis

The court heard that six shops had been targeted during their crime rampage, before being the three men were caught at the EE store on Peckham’s Rye Lane.

Local officers spotted two mopeds at the shop during the early hours of August 29, and noticed the shop’s entrance was smashed.

As they approached, Ventham climbed out from the shop and got onto the back of a moped ridden by Buttery and fled the scene.

Adolfess then came out of the shop and tried to run – but was tasered, detained and arrested. Ventham and Buttery returned on their moped and tried to help Adolfess escape, but were unsuccessful and again fled the scene.

Investigators connected the three men to a string of similar offences by scouring CCTV footage and phone evidence.

Ventham was arrested outside his home address on September 11 where he attempted to flee but was caught and detained.

A search of his home uncovered a large quantity of drugs, for which he was further arrested.

Buttery was later arrested at his home address on September 13.

Chief Inspector Jim Corbett from Operation Venice, which led the investigation, said: “These criminals callously burgled a number of mobile phone shops for their own financial gain.

“Not only did they cause damage to premises, but disrupted trade and caused financial loss to retailers.

“Trying to help their fellow criminal, Adolfess, escape police custody shows the attempts these individuals would go to, to remain at large and continue committing crime.

“Not only is it due to the work of the officers responding to the call, but also the tenacity of the Venice Investigation Team who linked the three to their other crimes across London and gained evidence against them that has achieved this sentence today.”

The other stores targeted:

Being ‘Jailed jailed’ means they won’t be able to go ‘out out’ for a while.

Southwark NewsNewsMoped gang who stole £50,000 worth of mobile phones in south London raids jailed after being caught in Peckham