Draper plagued with problems after work began in 2011 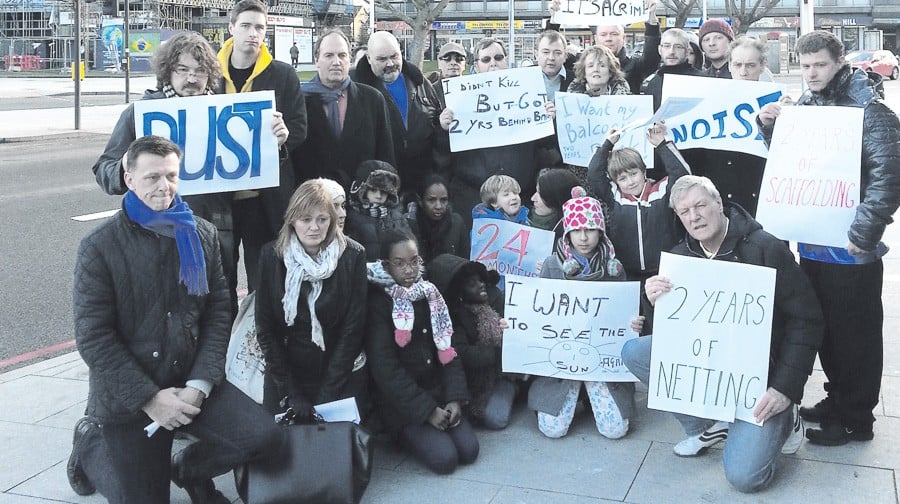 As residents of the Draper Estate put their hands in the air to enjoy the Fiesta on Saturday, some were up in arms over a council letter telling them the ongoing refurbishment of the block has gone over budget by £2million… so far.

After years of living behind scaffolding and netting due to a series of delays, Draper House saw the light again for the first time last year.

A few months later an independent report listed a catalogue of errors and substandard work carried out at the block, which began in 2011.

Almost immediately there was a six month delay when the initial contractor Breyer was suspended in 2012, following a serious carbon monoxide incident which hospitalised a Draper House resident.

Time is money in the construction world so the long delays led to escalating costs, with the council admitting a significant overspend last year.

The relationship between residents and the council was at an all-time low, with some leaseholders embroiled in legal action to recoup service charges. Then they received a letter last week confirming the £5.8million budget for the works has ballooned to a whopping £7.8million – and a new all-time low was found.

Despite a cap on the major works charges being agreed by the council last year, some residents were panicked by the letter, thinking it would lead to further claims on their savings.

“We were absolutely shocked,” said David Holden, a former leaseholder who is still involved with the Draper Residents’ Association. “Some elderly residents were upset by the letter because they thought they would have to pay more money,” he said.

“They have squandered so much money, which could have made a real difference to people’s lives. And it’s all down to their mismanagement,” he told the News.

Cllr Richard Livingstone, Southwark’s cabinet member for housing, said the letter was a standard legal requirement and plainly states it was not an invoice or a notification of increased charges.

“I can reassure leaseholders there that the council remains committed to the promised cap on the service charges and although they will be told when costs arise I can confirm that it does not mean they will be charged any more than that cap,” he said.