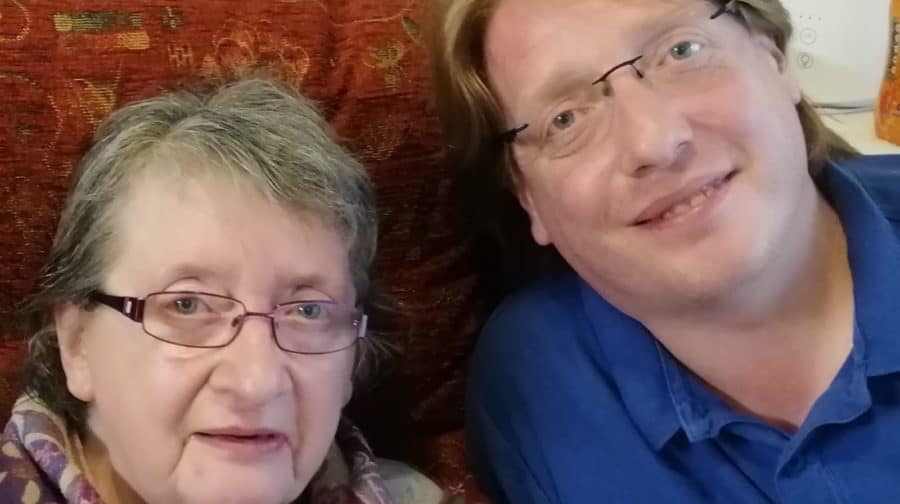 Kevin Quinn, co-director of the Southwark News, began life in Guy’s Hospital as one of premature twins being complimented by the Queen when she visited the new building: ‘Oh, aren’t they sweet?’ she trilled to Philip who, seeing the as yet unnamed tots, yellow with jaundice, with Quinn 1 and Quinn 2 labels on their incubator, inquired where the other three quins were, writes Michael Holland…

Once liberated from intensive care the babies started life in Rotherhithe before moving to the Vauban Estate in Bermondsey. “I grew up there until I left to go to the University of Bradford,” says Kevin.

At home, Kevin’s Irish mother was an avid reader who, despite holding down three jobs, always found time to visit Spa Road Library. Noreen Quinn instilled that love of books in her children. At St Michael’s school, Miss Taylor was the teacher who realised Kevin enjoyed reading and had a vivid imagination, so encouraged him to stop being the class clown.

Eventually he moved up to the top stream to join sister Sinead where he passed his exams with two As in English. “I used to come up with my own stories for English Language rather than what the teacher set,” he recalls. “One of the pieces I did was about a landlord in Ireland during the potato famine, which was based on a true story from a book I’d got out of the library.’

History and Current Affairs were two other subjects the young Quinn enjoyed at school, so a career in journalism was an obvious choice, and one he set about with gusto. At fourteen he gained work experience at the Financial Times: “I was put with the engineers, and in the post room, so I kept sneaking up to the newsroom.

At fifteen I decided to get my own work experience by badgering Dave Clark, who owned the Southwark News then, to allow me to come to the office where he gave me a little column to write called Teen Scene… It sounds a little naff now, but I loved going out and doing vox pops.”

This was all great experience for university and beyond: “I became – Kosmic Kev – the resident astrologer for the uni paper; it was pretty rude stuff that I would never write in the Southwark News now.

After uni I got an unpaid internship in Washington D.C. for three months… Dad managed to get the plane fare together and mum did a cleaning job, so I had some money. I had to sleep on friends’ floors there, but was offered a research job on the back of it.”

I watched Kevin become more and more animated as he remembered the excitement of those day. Working at something you love all the way across the Atlantic was quite something for the boy who grew up on the estates.

He continued: “Returning to Bermondsey I asked Dave Clark for a job but he only gave me a traineeship, so I did that instead, even though it was only £6,000 a year.”

All was going well for the fledgeling reporter at the fledgling newspaper until tragedy struck: ‘Dave died a year later and I ended up being joint editor at 21!’

At the time the business was leaking money and looked like going under, which is when the late Barry Albin-Dyer, the funeral director who was a friend of Clark’s, took over and provided financial help. Between Kevin and Chris Mullany (the other young editor), and the help of former Southwark News reporters, the paper was stabilised, and in 2002 Barry sold it to them. The rest is now local history. Kevin concludes, “I remember someone at the time saying that I was the youngest newspaper owner in the country at just 26.”

Kevin’s love of writing, history and theatre had seen him branch out into acting as a hobby. His mother Noreen developed a muscle wastage disease and he looked for something they could share.

He takes up the story. “I saw they were doing scriptwriting classes at Morley College so I said to mum, “Why not go?” but she had lost complete use of her legs and suggested that I join, and after each session we’d go over the work together – like we did when I was a kid with homework.”

The course tutor Stewart Permutt liked what Kevin was producing and invited him to join his writing group.

Since then he has written several plays and last Christmas staged his first production with theatre group Waste Not. “It was an adaptation of Jane Austen’s Pride and Prejudice,” he roars with a laugh. “I had a riot – It was a gay panto, so you can imagine it was pretty slapstick… I was surprised no one had done it before as Austen’s book is so full of innuendo.”

And now the playwright has taken the huge step of writing a book. A book that encompasses his love of writing and Irish history and includes his mum, Noreen.

It came about when the family were watching a film that included the legendary Kilmichael Ambush, which they agreed was not given the justice it deserved. Noreen knew this because her father, like many people from the area near Kilmichael, in 1920 was involved in fighting for independence against the British who had terrorised and oppressed the Irish for centuries while occupying their land; he had prepared the hideaway where the freedom fighters retreated to after the ambush.

At that moment the seed was sown and the first book of five short volumes has now been published. 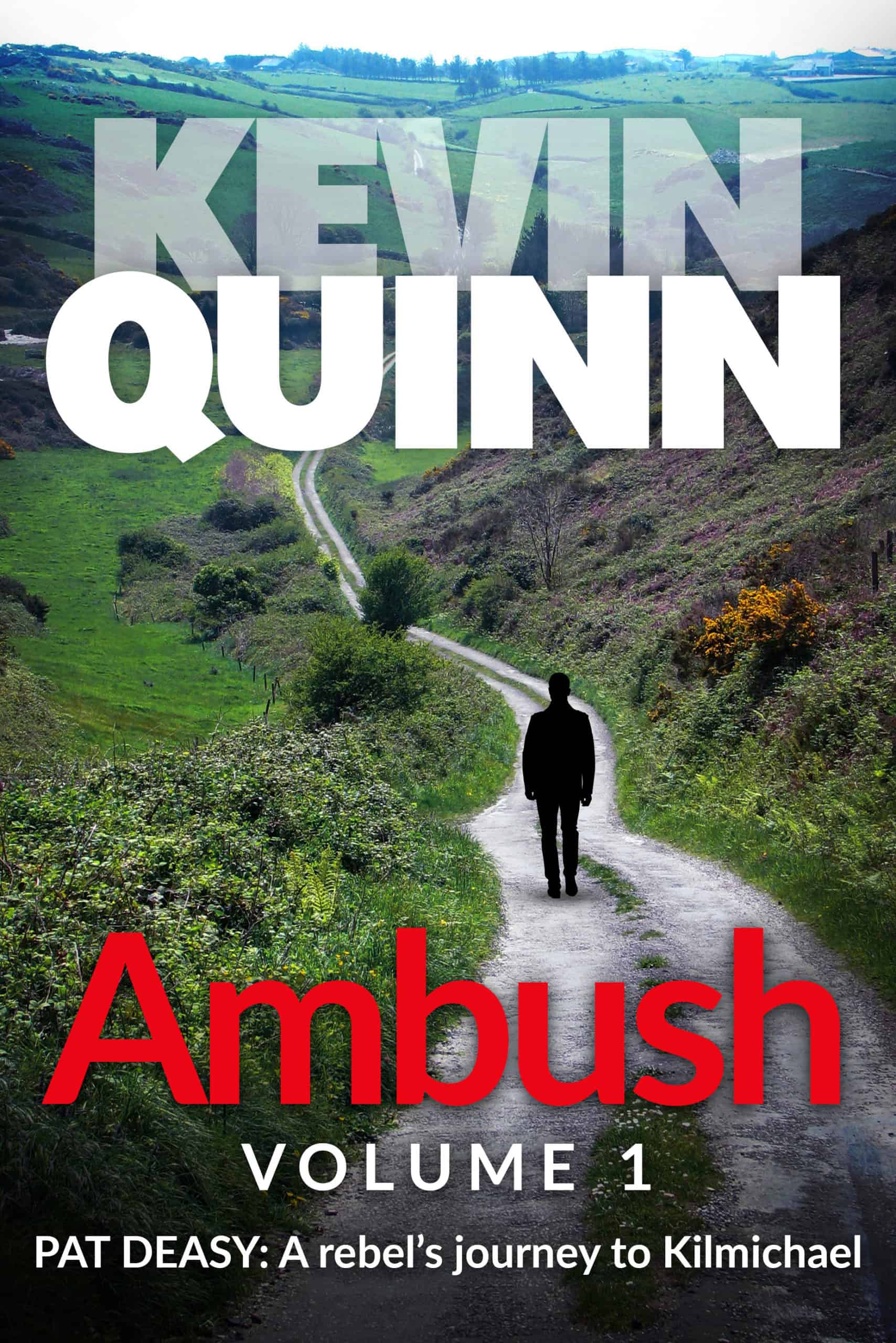 “My mother, it must be said, is as much a co-author of this story as myself,” says Kevin. “At her sheltered accommodation, armed with an iPad – which she can now only access with the use of one knuckle – she was able to while away many days researching the testimonials of those involved.”

Those testimonials, added to accounts from her father and from men she served when working in a pub as a young woman back home, meant Noreen had a unique perspective on the event.

Kevin would type out the story and dialogue, then Noreen would ensure that it was authentic to West Cork and its people.

Working together the Quinns created a book that has a genuine Irish feel to it.

The first volume is Ambush, and each one will tell the story of someone connected to that day when the heartless Black & Tans got their comeuppance.

‘As you go through the volumes,” begins the author, “the plot thickens as the characters’ stories intertwine, and by the end the reader will get the full picture of that fateful day, from young Pat Deasy in volume one, to Harry Moss, a Black and Tan in volume two; Flor Crowley, Town Clerk and secret agent for the IRA, in volume three; the loyalist landlord Lord Bandon in volume four, and Madge Hales in the final volume, who is heading up the female branch of the IRA locally and is a confidante of Michael Collins.”

I said it sounds like a true epic.  “It is fiction. It is a novel,” Kevin stresses. “But it is based on a true story… This is part of my family history – it is part of me. I think it would be a crying shame not to get it all down before it is lost in the mists of time.”

The centenary of the Kilmichael Ambush is this Saturday on November 28th.

To order go to

This sounds good, and written by a local man.

My parents are Irish and from Cork, so I will be getting this book for them to read.

With best wishes to Kevin on launch of his book……which helps to keep the story of Kilmichael and the participants alive…….and remembers proudly the Irish freedom fighters of that period…..while also giving some detail on the Crown personel and Ireland in that period……in particular in Co Cork….