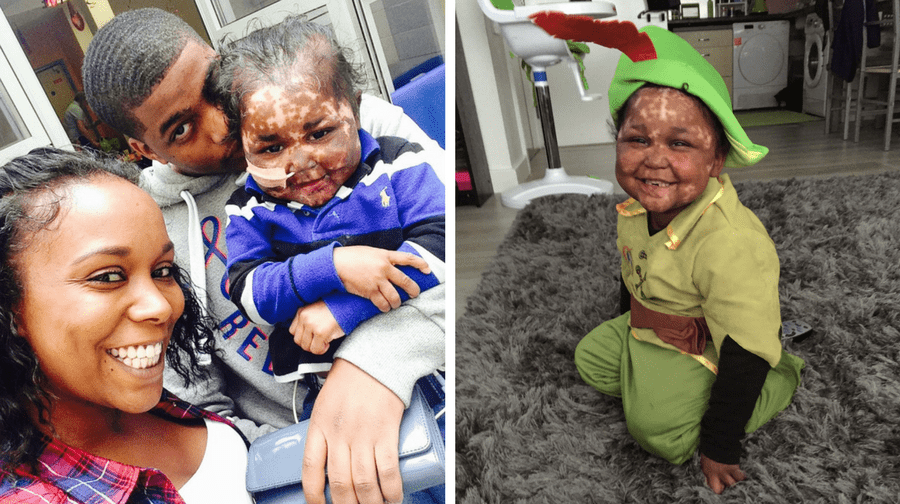 Jeanene Fraser fears her five-year-old son J'ssiah, who has leukaemia, could die because her boiler has been permanently on for seventeen months

The devoted mother of a terminally ill five-year-old says a boiler – which has left her heating permanently on for seventeen months – could “kill” her son.

Jeanene Fraser, 30, says her boiler has never worked from the day she moved into a Wandle Housing Association property in Spring Way, Camberwell, in January 2015.

The mum-of-four said she had no heating or hot water when she first moved into the property, and that this was eventually fixed after the News covered her plight. But she has now been left with her heating constantly on since October 2015.

Jeanene said the heat was unbearable and claimed her son J’ssiah, who was diagnosed with acute myeloid leukaemia in 2013, had been hospitalised with pneumonia a number of times because of it.

“Even if I turn the thermostat off, it’s still emitting heat – and even when I turn the radiators down it still has so much heat coming out it’s ridiculous,” said Jeanene, who is also mum to Kyerell, nine, Ashiya, eight, and Micah, eleven months.

J’ssiah with his older brother and sister Kyerell and Ashiya

“When we are getting ready they [the children] are literally sweating even with the windows open, so when I was taking them out during the winter months the cold was hitting J’ssiah so badly that he ended up with pneumonia and in hospital for three weeks.

“He can’t manage those little things because of his immune system. When we are leaving the house it’s like coming out of the Caribbean into England when I step through the front door.

“I had a baby in April and my youngest child actually got bronchitis because of this boiler situation.”

Jeanene said she was spending £300 on heating and hot water some months because she couldn’t turn it off. After complaining to Wandle, the housing association began to pay the excess each month, but they are yet to reimburse Jeanene for the money she spent prior to this, she said.

“I haven’t been able to do anything nice with my children because I’m spending so much money on this heating and hot water,” she said.

“I was trying to explain to Wandle that it could kill him because it is causing him to have pneumonia and because he doesn’t have an immune system he could end up on life support and it could kill him.

“I just want a house that’s normal that my son can live in in peace. The little boy has been through enough; none of my children should have to go through this.”

J’ssiah with his younger brother Micah

A spokesperson for Wandle said: “J’ssiah’s wellbeing is, and always will be, our priority. We are doing everything we can to support Jeanene’s family and resolve the problem with the heating as quickly as possible.

“We have repaired the boiler several times but unfortunately these fixes have not worked in the long-term. Following further investigation, the boiler will be completely replaced in the coming weeks.

“We have reassured Jeanene that she will not be left out of pocket, including compensation for the additional heating costs prior to us becoming aware of the fault.

“As agreed last week, we will pay Jeanene the additional money she is owed quickly to ensure she and J’ssiah do not suffer any financial hardship.”