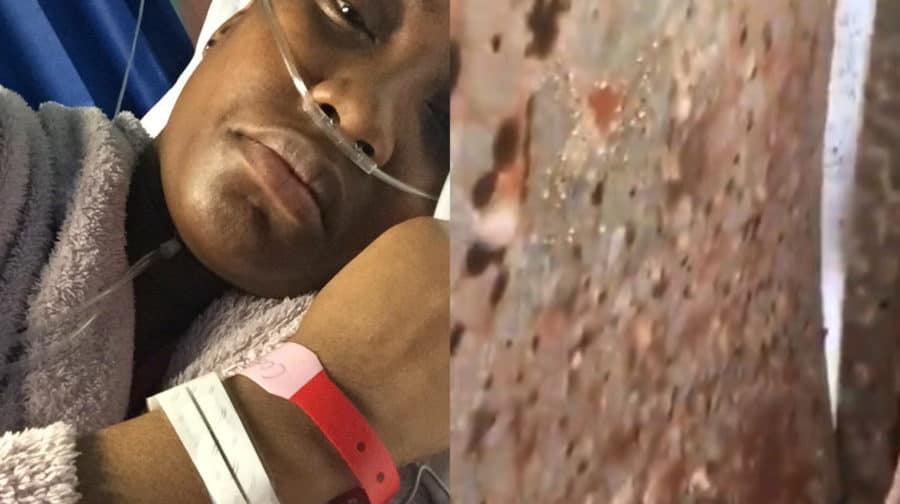 A woman living with her three children in a mould-infested one-bed council flat in Elephant & Castle has told of her “despair” at not getting rehoused, writes Kit Heren…

Dabe Amaechi has lived in a flat in Perronet House on the Elephant & Castle roundabout for more than a decade. She and her eight-month old daughter suffer from sickle-cell disease, a serious and often-painful condition for which she is regularly hospitalised.

Heating in the flat often breaks down, Amaechi said, and mould lines part of the walls and floor of the bedroom, where she and her three children usually sleep.

“If you have sickle cell you need to be warm, because the cold can trigger a crisis and you can end up in hospital. Obviously breathing in mould is not good for me and the kids either,” Amaechi added.

She told the News that she has been trying to get rehoused for several years but has not been successful, despite coming close about two years ago.

Southwark Council has offered Amaechi temporary accommodation in Forest Hill. She said this was unsuitable because it was too far from Guy’s Hospital, where staff know her and her condition.

Amaechi said her sickle cell disease means she has to have regular monthly blood transfusions. When she has previously been treated by doctors in different hospitals she has often become very ill, she added.

Amaechi also feels the temporary accommodation is also too far from her children’s school in Borough. She and her children are now staying with a friend nearby.

Separately, the story took a tragic turn earlier this year when Amaechi’s baby daughter caught Covid-19 in hospital after being taken in for sickle cell treatment. Amaechi said the coronavirus was passed through the family before her father, who does not live with them, was infected and died in January this year.

“I’m on medication for anxiety and depression,” Amaechi said. “I’ve gone through so much, my health is at the worst point it’s ever been. And now I’m going through a grieving period but I have to keep it down because I have to be strong for my children.

“When you’re in a situation where you’re in despair and you feel there’s no way out, it just feels awful.”
Amaechi said she has retained a solicitor and is considering legal action regarding her housing situation.

Cllr Stephanie Cryan, Southwark Council’s cabinet member for council housing, said: “I am so sorry that Ms Amaechi has been through so much this past year. While it wouldn’t be appropriate to comment on the details of Ms Amaechi’s specific case for legal reasons, we can say that we are very sympathetic to her housing situation and very keen to help her and her family. We are always here to support tenants and resolve their repairs, and can do so if we are granted access.”