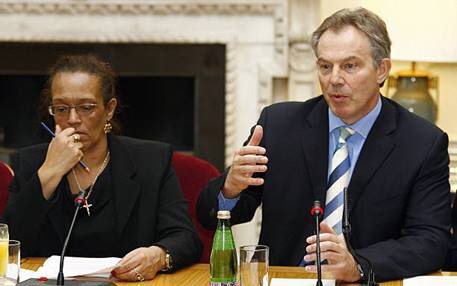 Tributes have been paid to Mothers Against Guns co-founder Michelle Forbes who passed away last week.

The former senior probation officer at Camberwell Magistrates’ Court became one of south London’s most recognisable campaigners after her 21-year-old son Leon, a father with another baby on the way, was shot to death on the doorstep of the family’s home in Clapham.

In her search for justice she turned her family’s devastating tragedy into a catalyst for change, teaming up with fellow bereaved parent; Peckham’s Lucy Cope to lobby the government to impose tougher sentences on gun crimes and calling for life to mean life behind bars.

The formidable pair took their campaign to Downing Street and the heart of Tony Blair’s government, and as far afield as the USA, having audiences with president Bill Clinton and former New York City mayor Mike Bloomberg.

Lucy Cope paid tribute to Michelle describing her as ‘like a sister’.

“I lost my son before Michelle and I remember like it was yesterday when she came to my house,” she said.

“She was broken, and we have stuck together all these years. I feel like a sister has gone.

“Like you said – if we get closed doors we’ll kick them down.”

Although the government has pledged to crack down on serious crime and increase sentences through its controversial police, crime, sentencing and courts bill,  violent crime has escalated after lockdown.

Two teenagers died within hours of each other in separate attacks in Lambeth and Greenwich on Monday.

They are the latest victims in a wave of serious youth violence across London.

In a grim record, 63 homicides have been investigated by the Met in 2021 so far.

The Met has warned the city is now set to have the highest number of teenage killings since 2008 – when 26 young people died.

Fatal stabbings between January and April were up by a quarter compared to last year.

READ MORE: Government needs to do more than legislate to tackle teen killings

That’s very sad. What a greater pity is that this brave lady never saw her demands for life to mean exactly that, a Life Sentences. The Guidline Sentencing Council has a lot to answer for.
Neverless she has been making a stand for justice for her son, and others.
God Rest her Soul.