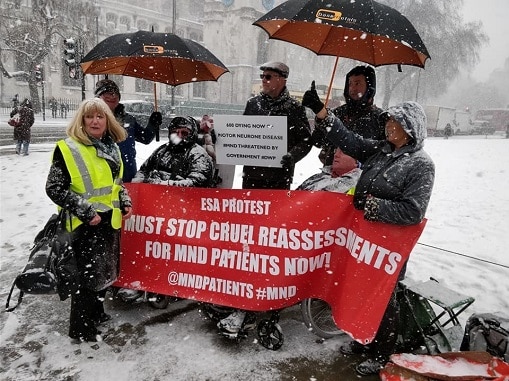 Lorraine Sheahan, from Bermondsey, whose father died from the illness, joined last Wednesday’s demonstration outside parliament.

She said an estimated 600 people with the disease were being forced to complete reassessments to receive their employment support allowance.

People with incurable Motor Neurone Disease become progressively paralysed until they are unable to speak and even breathe.

She told the News: “From diagnosis, a third of people will die within one year, and over half within two years.

“Not only is the government wasting taxpayers’ money, they are also wasting what little time these people have left.”

Campaigners say the department for work and pensions should be able to verify sufferers’ inability to work through a quick call to their GP or specialist.

The News requested a comment from the department for work and pensions, but at the time of going to press had not received a response.