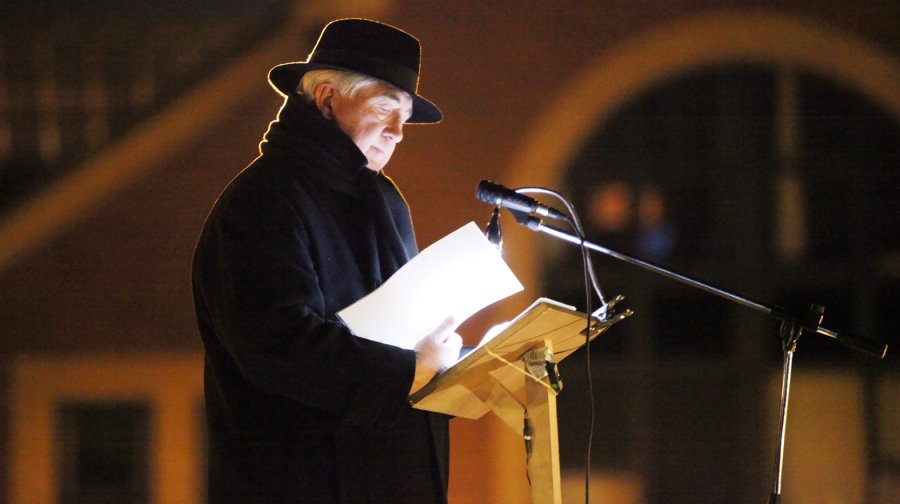 Jan with Barry and their two sons, Jon and Simon

I was married to Barry for 25 years and we were blessed with two wonderful sons, Simon and Jonathan, who in turn have given us nine beautiful grandchildren.

Although we parted eighteen years ago we have remained good friends, with the happiness of our boys being our main priority, and from the day he was diagnosed with this cruel disease he has kept me updated personally.

When I first met him when we were teenagers he was passionate about Albin’s and his dream was to take over from Fred Albin when he decided to step down.

This he did and Fred would not have allowed that if he didn’t think Barry was capable of taking on that mantle.

The rest is history and Barry has far surpassed his dreams with the building of the Memorial Garden for the people of Bermondsey and Rotherhithe, who have always been so dear to him.

I just want to thank you all for the wonderful messages and love you have sent for Barry and our boys and to ask you to keep supporting Simon and Jon, who are both heartbroken and face a difficult time coping with their grief and keeping Albin’s up to the very high standards their dad set.  They have fantastic wives, Michelle and Jane, and extended family and friends around them, for which I’m truly grateful.

I would also like to thank the wonderful staff at Albin’s for their support of our boys and their families through this difficult time. They have all stepped up to keep everything running normally – thus allowing his family to be with Barry through his final days.

If anybody represented the best of Bermondsey, that person was Barry Albin Dyer.

He loved and cared for tens of thousands of people and families in Bermondsey and further afield and they and we all loved him back. His whole family have been just wonderful, and in his final days have watched over him like angels in the difficult days and hours before his death. Simon, Jon, Jackie and all Barry’s family know they have the love, prayers and support of thousands of people every day. This will continue always, because nothing can undo what Barry has done and given and meant to us all.

Barry has been a caring, generous, thoughtful and honest friend for many years. I have been privileged to share many happy occasions with Barry and his family, and saw at first hand how much he adored his family and firm and cared for them every day. Among all the achievements in Barry’s richly full life and career, the responsibility for all the funerals of our service men and women who died around the world was perhaps the greatest badge of honour for F.A. Albin & Sons. Barry was rightly honoured by the Queen and made one of her Deputy Lieutenants for London, and regularly visited by the royal family and VIPs from home and abroad. But he always saw events like the annual Albin’s memorial service for local families as equally important.

Barry made sure his sons and everybody at Albins paid equal attention to the needs of everyone who asked for their help, whatever their circumstances. He was enormously generous to local people in need over the years. Simon and Jon and all the family has shown over the years that they have had devotion without limit to Barry. I know for certain that all that Barry created and developed will be in the safest possible hands.

He was a lovely man – you couldn’t wish to meet anyone better.

He was well respected within the community. People absolutely loved him because he looked after everyone. You can be poor or rich and you’d get the same funeral from Barry. Everyone had to be treated the same.  He was the best undertaker in the world. He was a true friend and he will be greatly missed.

I’ve met royalty from all over but no one had the aura of Barry. When he walked in the room it lit up. He wasn’t a rock star or an actor but there was a special aura about the man. We were proud and privileged to have him on board. He touched everybody. The angels must be really proud to be escorting him to the big man.

The man was an icon in his field, a legend who is now resting in peace and in comfort knowing you will all mourn him, but the memories you all share will change from sadness to bring a smile to each face.

I can see Barry looking down on you all with pride and satisfaction – his legacy will always be felt.

Barry you did the fallen proud and you will be missed, of that there is no doubt at all, so close your eyes and go to sleep and rest in peace. You may have gone, but you and your old fashioned values will never be forgotten, and your presence will always be with us, when we hear your name.

How does one sum up Barry’s immeasurable contribution to the Bermondsey community, his compassion, impeccable etiquette, a shoulder to cry on in our darkest of hours to help soothe the pain of losing our loved ones and a trusty guide on their final journey?

A silent benefactor to so many, whose demeanour and humble countenance is something we should all aspire to and I am sure the world would be a better place.

Thank you Barry, deepest and sincere condolences to the Albin family.

He was a true friend of mine. He lived and breathed Bermondsey and was always there to help us if we had an idea to promote the area or Southwark Park.

He was generous and Johnny Donovan and Barry both put in thousands of pounds to create the Bermondsey pensioners’ ‘Party in the Park’ events, where over 200 pensioners from around Bermondsey were treated to a pie’n’mash, drink and live entertainment in a large marquee in Southwark Park.

In his line of work he picked us up when our hearts were broken, put a strong arm around our shoulder and told us ‘it’s going fine and we’ll get through this together’ and made our last goodbyes a little easier to bear. Personally, I will miss him a lot and I don’t think that we will ever see another man like Barry, his presence and his love for Bermondsey, again.

Thanks Barry for the laughs, smiles and now the tears. God bless, mate.

Steve – It’s going to be tough but he would say ‘the show must go on. I know you’re hurting but we’ve got other people’s funerals to do and we’ve got to look after people’.

It [Albin’s] will carry on the same because we’ve had the best teacher anyone could have had. He’s the Godfather to us. I loved the man.

Greg – His door was always open. If you had to speak to him about anything, you’d walk out feeling better and he’d come up with a way of helping you.

He’ll be here in everything we continue to do.

Greg Watts, who helped write two of Barry’s books with him

One of the many things that impressed me about Barry was that, although he was successful and an important figure, he never made a big thing of that.

He had time for everyone and was genuinely interested in the lives of others. Sometimes when I interviewed him in his office at the funeral home, a local character would tap at the window.

Barry would open it and often give him a little job to do in the yard and then slip him a few quid afterwards. Barry always said I taught him to write. He taught me much more.

Barry was a true inspiration to Bermondsey itself. He comforted thousands of people and cared for them for years.

If it wasn’t for this man I wouldn’t have had a good send-off for my little girl in February this year.

He always made sure he did everything he could for his community. Now it’s time we all come together to show the world how much of a nice man he really was. Barry you will always be in my thoughts and prayers along with your family, may you rest in peace you’re now an angel along with all those other angels you did good for.

I still can’t believe this sad loss. I was in tears when I saw he had passed – he was truly a good man, true legend.

I was so sad to hear of Barry’s death. As Vicar of Holy Trinity Rotherhithe from 1985 I had many dealings with Barry.

He always went the extra mile to support and care for grieving families.

Then three years ago as Bishop of Taunton I brought some colleague bishops to meet him to ‘see how funerals should be done’.

He was, as ever, generous in his hospitality and insightful in his comments.

The folk of Bermondsey and Rotherhithe will miss him greatly

To read about how Barry saved the Southwark News click here