Coyle wants patients to have more say in their own treatment, and to make sure families are involved in care decisions 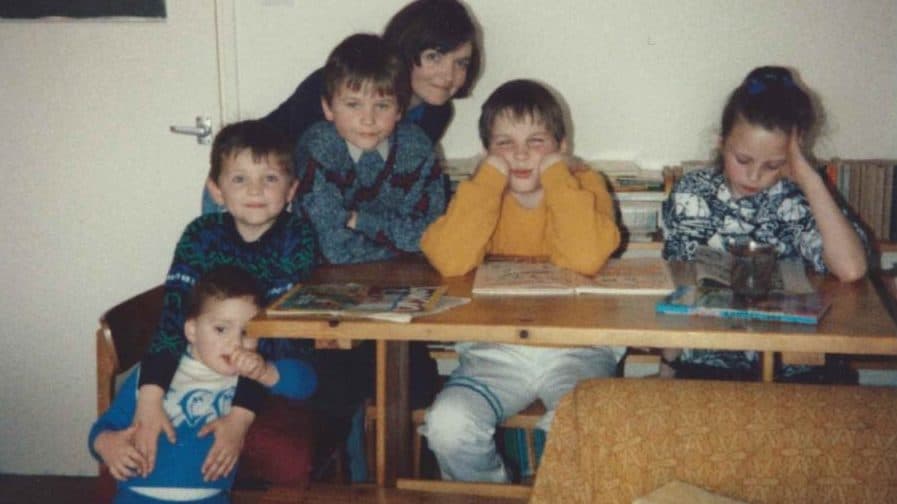 Neil, his mum and siblings Alex, Matt, Mark and Sebastian

Neil Coyle spoke movingly in Parliament last week about the devastating toll his mother’s mental illness and long-term detention had on his childhood. Neil and his siblings, outside the home his mum set on fire during a period of illness

The Bermondsey and Old Southwark MP is lobbying to reform the Mental Health Act, legislation which gives the power to section someone for their own safety.

Coyle grew up in Luton, initially living with his brothers, sister and mother, a teacher, after she separated from Coyle’s father.

His mum was sectioned for the first time after developing schizophrenia ‘out of nowhere’ and ‘very fast’ while he was a young child.

She has now been detailed under the Mental Health Act more times than he can count, most recently in 2016, and often for stretches of weeks or months at a time.

In last Thursday’s speech – where he described how at one of the lowest points of her illness she set fire to the house to try and keep the children warm, a visibly emotional Coyle told his colleagues how his mother’s escalating mental health crisis led to his half-brother, Sebastian, being taken into care: “She was unable to look after him because she did not have support,” he said.

“He was initially fostered, but mum’s behaviour became too problematic.

“I went to see her once and the front door had been broken in.

“She told me that there had been a burglary, but nothing was missing, and it turned out that the police had had to be called because she had taken Sebastian from the foster carers and they had had to break in to take him back.

“He was formally adopted at five years old, and I have not seen him since.”

Sitting down with the News this week, Coyle said it surprised him just how hard it was to open up and tell his family story.

“I had practised it with family and others but there was one line I couldn’t even say, which was when I talked about Sebastian who was adopted after being taken off Mum, there’s no way he can’t remember us.

“He was five, he could not have possibly understood what on earth was going on and why he had to be with other people. Neil’s mum and dad with siblings Alex and Matt, before her mental health worsened

“My sister Alex taught him the words to ‘Don’t Worry Be Happy’ in mum’s white Astra and he must remember, it must bring something back to him.

“But I couldn’t say that on the day as I was already getting too upset.”

The key changes Coyle wants to see in a reformed Mental Health Act are making sure when a patient is detained they still have a say in their own treatment, and that family members and friends aren’t cut out of their care.

As well as improving the care given to people who are seriously unwell, Coyle is also concerned about a rise in detentions across the board – pointing to a struggling mental health system that is not intervening early enough before people reach a crisis point, and calling for parity of funding in the NHS.

Mental health services currently receive just 13 per cent of NHS cash and, in the last decade, across the country the rate of detentions has increased by 47 per cent.

A spokesperson for South London and Maudsley NHS Foundation Trust said: “The Trust recognises that the experience of being detained under the Mental Health Act can be a traumatic and difficult experience for people.

“Although these numbers rise and fall, overall in recent years the Trust has not seen any significant change in admission rates.

“We continue to work hard to improve our services to help people stay well in the community, and to make changes to ensure people have the best possible experience when they come in to hospital.”

When detained, severely mentally ill people are particularly vulnerable – with the Care Quality Commission sounding the alarm over cases of sexual assault in UK detention units.

And it’s not just frontline NHS workers struggling with the scale of our mental health crisis.

Uses of Section 136 of the act, which gives police the power to ‘remove a mentally disordered person without warrant’ doubled between 2015-16 and 2017-18 in Southwark, from 60 to 121 detentions.

Although this figures has come down to 100 in the last year, it is clear the police are still left picking up the pieces where other services are failing. Coyle says he is still learning to deal with the trauma of his past, but believes his experiences are fundamental to his work as an MP.

Despite a troubled childhood – including three arrests including for shoplifting aged ten – Coyle excelled academically and went to University, eventually unseating Simon Hughes in 2015.

“I do see patterns of bad behaviour in myself that tend to be stress-related, drinking too much sometimes if I’m honest, but at least I’m aware enough to know that.”

“But this isn’t a pity me story. My experience has given me resilience and coping skills, and I can laugh through most things.

“People say they want ‘real people’ in Parliament, well I hope I fit that.

In his career so far, Coyle has shone a light on the impact of Universal Credit, austerity, and also drawn the ire of Corbyn-supporting activists for his outspoken criticisms of the party’s leadership and handling of allegations of anti-Semitism.

Outside work his priority is his family – including wife Sarah and daughter Esme, who often join him at events across Southwark.

“Where we live in London she has every opportunity in front of her.

“But most importantly I’m not a Dad who’s nervous about saying I love you to my daughter.”