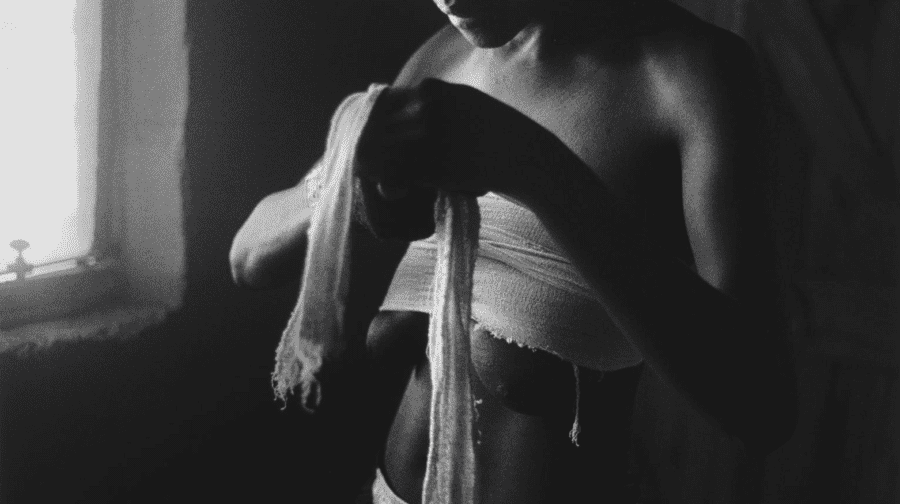 Confronted with the image of the lower portion of a black body, with scarred thigh, hands protectively covering genitalia and face out of shot, it’s unsurprising this exhibition’s purpose is to draw attention to the ongoing violence experienced by South African communities who do not prescribe to expected gender constructs and are experiencing violence, discrimination and hate crimes, writes Carolyn Hart Taylor.

Despite political changes, South Africa being the first country to outlaw discrimination based on sexual orientation, Muholi’s images and film make up an exhibition that both exposes the continued hate crimes perpetrated on those from the Black LGBTQIA communities, whilst also celebrating their refusal to be contained and subjugated. 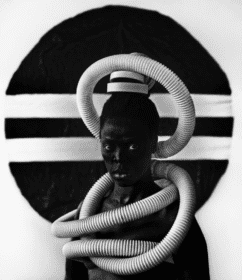 This is demonstrated in a black and white photograph when one eye stares directly out from behind smoke, both connecting and challenging, making it clear that the issue of gender identity will not disappear until all perspectives are equal.

Journeying through the exhibition’s latter images, one can see participants express their identity through clothes and costume, flamboyantly and unapologetically owning their space, showing that despite the locations being segregated during apartheid, the act of transitioning enables a reclaiming of the spaces.

When we think of oppression, we might imagine being met with images depicting the shrinking of the subjugated, but Muholi’s images defy containment, using light to expose beautiful black bodies entwined protectively and lovingly.

Muholi, adopts the stance of the beauty queen in a 2009 series, one of which is titled Miss Lesbian, where the viewer can see the performance aspect and use of props that became integrated as a means of escaping gender constraints. Muholi, stands in an aqua blue sequinned bathing suit, yet, with fists clenched and striking a boxer’s pose, is more a challenge to the viewer unable now to categorise this beauty queen by using standard definitions, and as Muholi states: ‘My mission is to re-write a black queer and trans visual history of South Africa…’.