Mum and son save their home from developers after ‘turning detective’

The pair have saved their home from demolition after proving its 'heritage value'. 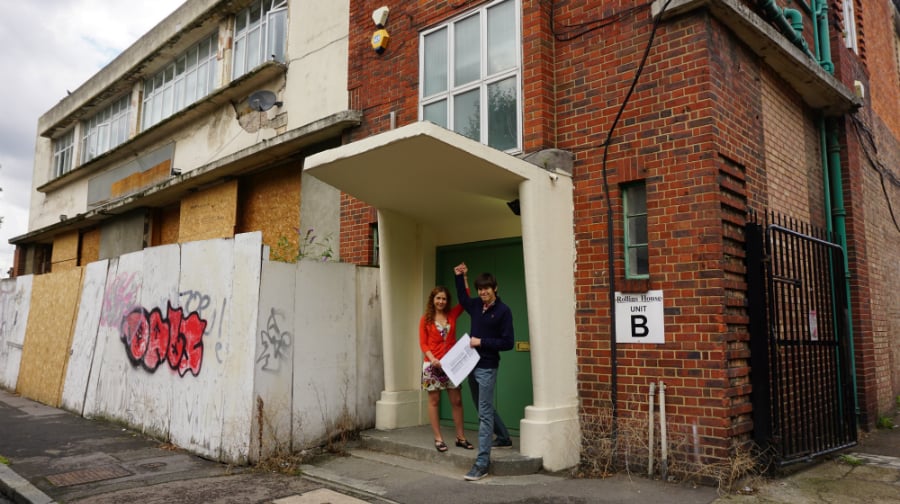 Success! Gabriela and her son Sami

A mother and her teenage son have successfully protected their Art Deco home from demolition after ‘turning detective’ to prove the building’s historic value.

Developers Renewal had planned to level Rollins House as part of their huge ‘New Bermondsey’ project, which will provide 2,400 homes around Millwall FC’s stadium.

However, artist Gabriella Kardos and her fifteen-year-old Sami have spent two years scouring archive footage and old maps to prove that the building had real ‘heritage value’ and should not be destroyed.

At Lewisham Council’s planning committee meeting last week Sami delivered a 27-page document to councillors, which proved that the building dated back to 1937, and not 1947 as initially stated in planning documents.

An old resident of a neighbouring building, who Sami tracked down, also gave evidence about his pre-war memories of the building.

The councillors responded to Sami’s presentation with a round of applause and a decision to defer giving any planning permission for the site.

Sami said after the meeting: “I hope this sends a clear message to the developers. Firstly, bullying people out of their own homes and undermining our history does not work. And secondly, true regeneration must be inclusive of the community and not for greed.

His mother added: “I’m very pleased to see that justice has prevailed and that the time and energy we invested into saving our home, which is a historic Art Deco building, has not been in vain. We’re looking forward to getting our lives back.

“We wasted enough time fighting these developers who have no real understanding of how to carry out a development that does not destroy a community but instead aims to enhance it.”

Renewal now have three options going forward: to accept the planning committee’s decision, to appeal against it or to submit a modified application.

A spokesperson for the developers said: “We are disappointed with the committee’s decision, however, we understand this is an iterative process. We have taken on board the comments from members and are considering our options. We will be engaging further with the council in due course.”