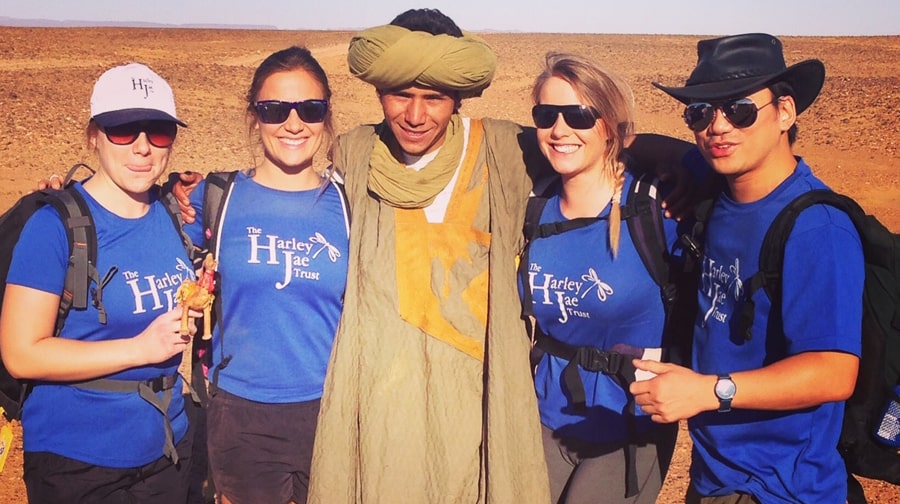 Lucy on her Saharan journey

A Borough mum has returned from a gruelling charity trek through the Sahara Desert in memory of her “miracle boy”, who passed away in February 2013.

Seven-year-old Harley Jae passed away after a life-long battle with pontocerebellar hypoplasia type six, a disorder that caused him stomach problems and induced him into comas.

His mum, Lucy Blanchard, took part in the four day event through the world’s largest desert from November 19 to 24. She and her friends Karina Bidault, Katie Fletcher and Geoff Ho, raised over £8,000 for the which was set up in the brave boy’s memory and is currently raising money for the Paediatric Intensive Care Unit in Nottingham.

Lucy said: “I have just about recovered! It was really hard, much tougher than I thought, but a great, rewarding experience.” Lucy and her group walked up to nine hours a day and camped on the sand dunes under the stars.

She said: “The views were incredible and the fellow trekkers, which included loads of other charity fundraisers, were great. “It was mentally draining though. By the end of the day it would be so hot, and you would struggle up a dune expecting to see something different but always seeing the same view.

“And walking on sand is so tough. You climb one step up a dune and slide back down half a step, so it’s taking twice as long as usual. Your legs would hurt and there were blisters on your feet.”

How we first reported the story

Despite this, Lucy said the struggle was worth the effort, raising thousands of pounds for the Harley Jae Trust.

She said: “I had a lot of quiet moments to think. I spent an hour one evening sitting on top of a dune when everyone else was asleep, thinking about elements that I am going to include in a book about Harley.” To donate to the fundraiser, please visit: www.goldengiving.com/fundraising/saharaforhjt.

For more information about the Harley Jae Trust visit www.theharleyjaetrust.org.