A new life-changing drug is offered in ten European countries, but not in England 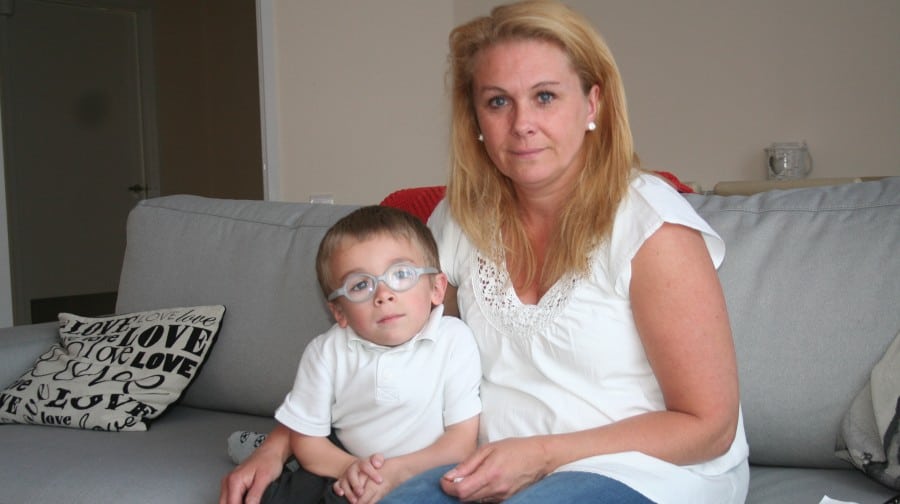 Harvey and his mum Vikki are fighting to get the new drug, Vimizim, offered on the NHS

A ‘heartbroken’ mum, who will have to watch her little boy slowly deteriorate because of a rare disease, is fighting for a new life-changing drug to be allowed on the NHS.

Harvey Brown is like any other six-year-old boy – when asked what are his favourite things to do, he replies enthusiastically: “play football and eat all the chocolate cake!”

But because he has an ultra-rare degenerative disease called Morquio, which affects just 77 children in the UK, Harvey already has to use a wheelchair most of the time just to get around.

The inherited illness is caused by an enzyme deficiency, which means Harvey’s skeleton will not develop properly. His organs will continue to grow but his weak bones won’t and he is likely to develop heart disease and breathing difficulties, while losing his vision and hearing.

There is no cure for Morquio, and, untreated, patients rarely live beyond their twenties.

A drug which could help Harvey live a longer, happier life is not being offered on the NHS yet, so Vikki and little Harvey took their fight right to the Government’s doorstep in a protest outside Whitehall recently, to demand the “life-changing” drug be made available before it’s too late.

At first doctors thought Harvey had a curved spine, so it wasn’t until December 2013 he was finally diagnosed with the especially unusual form of Mucopolysaccharide disease (MPS).

“It was devastating but you have to get on with it,” said mother-of-four, Vikki Brown, of Galleywall Road.

“It’s heartbreaking sometimes when he wakes up in the morning when he can’t move,” added Vikki, who is bracing herself for her little boy’s condition to get worse as he gets older.

The first effective treatment drug for Morquio was licensed by the Eurpoean Medicines Agency in April last year but, despite being offered in ten other European countries now, it has still not been approved by NHS England.

A charity for those affected by MPS diseases has been campaigning to get the drug Vimizim on the health service because it says it would help children like Harvey grow and develop stronger bodies, walk more easily, hang on to their vision and ultimately live longer.

But because NHS England lacks a wider policy for considering access to treatments for rare conditions, the decision whether to offer Vimizim or not has been delayed for over a year.

Christine Lavery, Chief Executive for the Society for MPS Diseases, said: “Members with the ultra-rare disease Morquio have had no choice but to wait an inordinate amount of time whilst NHS England have tried to develop a process for evaluating medicines for ultra-rare diseases. This lack of process has denied vulnerable children and young adults with the degenerative condition Morquio access to the life-changing drug Vimizim,” she added.

“We may only have him until his early twenties, so for us it’s about making our child’s life easier and having him around for a bit longer,” said mum, Vikki, 46.

“I just wish we could take it off him. We want to take it away from him and for it to be one of us instead,” she added.

NHS England has said it is currently considering the results of an ongoing consultation over access to drugs and will be making a final decision on Vimizim on June 25.

Until that day Vikki says she is just “hoping for the best” and doing everything she can to support the MPS Society, which has led the fight to get the life-changing drug on the NHS.

Surrey Square Primary, where Harvey goes to school, is holding an MPS Society fundraiser tomorrow with all the pupils paying a pound to wear blue clothes for the day, followed by a cake sale.

To donate to the MPS society, please visit www.mpssociety.org.uk