Chloe was diagnosed with a rare form of eye cancer 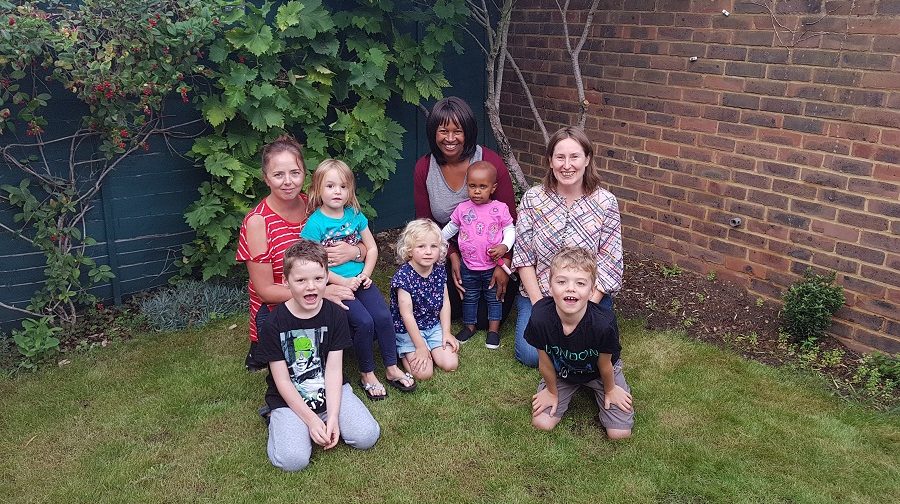 Isabel and Chloe with Susan Geary and family

The adoptive mother of a baby diagnosed with a rare eye cancer has thanked the Rotherhithe family who took them in and ultimately saved her daughter’s life.

Not long after taking her daughter Chloe home from an orphanage in Kenya, 49-year-old Isabel noticed something wasn’t quite right with one of her eyes.

Having previously read an article about retinoblastoma – a rare cancer of the retina usually seen in children under the age of five – Isabel recognised what it was immediately.

“My heart just dropped,” said Isabel, who used to work in Canary Wharf. “The sun was coming into the room and hitting her eye at a particular angle and I saw a translucent pupil and I recognised it straightaway.”

In February this year, Isabel’s fears were confirmed when she got the devastating news that Chloe had retinoblastoma and needed treatment urgently.

The new mum said she was advised by doctors in Kenya to get treatment in the UK if possible, since she was born in Aberdeen and had dual citizenship, as all they could do in Kenya was remove Chloe’s eye.

Isabel broke the heart-breaking news to her close friend Eleanor Thorn, who lives in Rotherhithe and whom she met at a fertility support group when they were both struggling to get pregnant.

Eleanor decided to put out an appeal to parents in the Canada Water Cool Babies Facebook group asking if anyone could take Isabel and Chloe in, as the youngster needed to travel to London for six rounds of chemotherapy at Great Ormond Street Hospital.

They were overwhelmed by the response after Susan Geary, whose friends coincidentally worked for the charity running the orphanage in Kenya, offered them a spare room in her family home in Rotherhithe.

The rest of the community also rallied together to donate things Chloe might need such as a cot, steriliser and clothes.

“Our faith is really important to us and we really feel if you are able to provide practical support as well as everything else it’s a great position to be in,” said Susan, who goes to City Hope Church in Bermondsey.

“Our three children have been absolutely fantastic about it and they love Chloe.

“It’s been a real blessing to have them in our house and we are absolutely thrilled the treatment has gone so well.”

After four months in Rotherhithe and six rounds of chemotherapy, Isabel finally got the news on July 31 that the treatment had been a success and Chloe’s tumour was benign.

“She recovered very quickly from the tumour and she is now back to being herself,” said Isabel.

“She is talking a lot, climbing, laughing, and dancing – she is full of beans and you only have to poke her in the tummy and she laughs.

“I’ve been so amazed and touched by Susan’s and her family’s kindness and the whole community has just been amazing.”