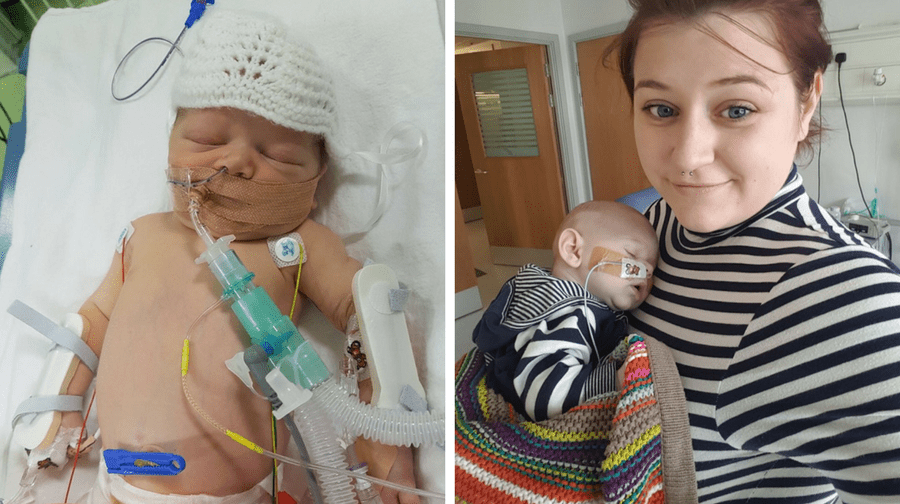 A Bermondsey mum has urged others to “trust their gut” after almost losing her baby to sepsis.

Little Dexter was just a few days old when he was rushed to hospital and put on life support after contracting the deadly illness.

To the amazement of doctors and his parents, the tot pulled through – but he has been on a feeding tube and antibiotics ever since and has lost the use of one lung.

His mother, 28-year-old Kayleigh Moorcroft, is now warning other parents about the symptoms to look out for to stop it from happening to other children.

“We came home when he was four days old and had a midwife check at five days old. I told the midwife that he wasn’t feeding very well and she told me he had a cold.

“The next day he didn’t take any milk all night and I called 111 who said if the midwife said he had a cold, then he had a cold.”

That night Dexter went to sleep and didn’t wake up again.

Dexter with his sisters

“I woke up at about 6am and he looked like he was asleep but he was freezing cold,” Kayleigh recalled.

“I wrapped him up thinking it was November but he looked like he was dead; his lips were blue and he had bruises around his eyes.

“The doctor is four minutes up the road so I literally ran there and he came straight away and put Dexter on oxygen and we called an ambulance.

“It was so scary. My husband didn’t know what was going on because he is deaf so he could just see me getting upset.”

Dexter was rushed to the intensive care unit at Evelina Children’s Hospital and put into an induced coma and on life support. It was another week and a half before he woke up.

“He had basically got bronchiolitis and because he was so small it caused sepsis,” said Kayleigh.

“There are three stages of sepsis; the third is organ failure and that’s what he had.

“They had to give him all these medicines and hope that he would pull through.

“The doctor said if I was an hour later he wouldn’t have pulled through and Evelina gave him a 40 per cent chance of survival.”

Dexter returned home after three weeks in hospital but went on to get sepsis another two times.

He is now on full-time antibiotics and has to eat using a feeding tube.

The tot has also lost the use of one of his lungs but Kayleigh hopes he will soon have an operation to get it working again.

“He is on constant antibiotics to stop it from happening and he has a feeding tube because since he was on life support so long when he was so young his muscles in his throat don’t work properly and he can’t swallow,” she said.

Kayleigh, who also has three daughters aged six, four and two, urged other parents to trust their instinct.

“Just trust your gut; I didn’t – I listened to the midwife and 111 and they were wrong,” she said.

“He is so happy now but it’s cold at the moment so I find myself watching him.

“I would rather go to A&E and be told I’m stupid and to go away than to not go.”