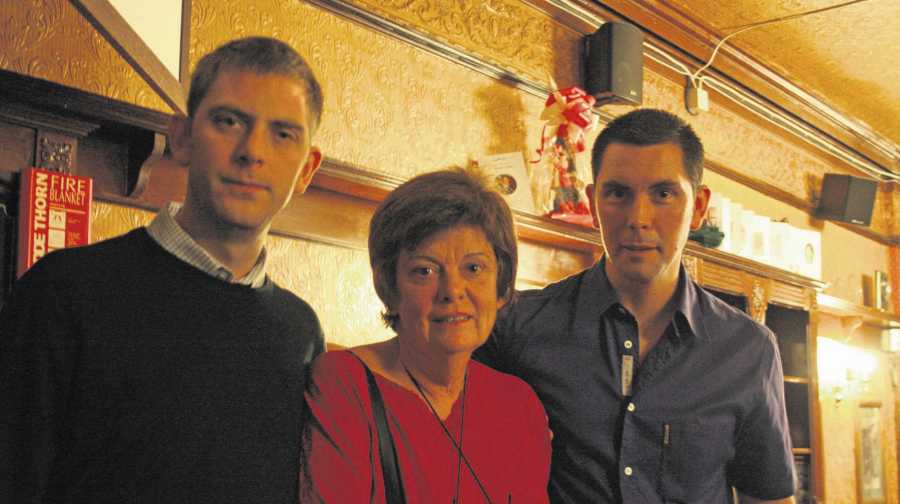 The brave mother of an innocent man stabbed to death in a botched revenge attack has spoken of watching his last painful moments as he gasped for breath.

Launching her self-funded anti-knife campaign ‘Cut it out’, Jean Foster has had to face the awful truth of her son Chris’s murder so she can get her message out there to young people still carrying knives on Southwark streets.

Chris Foster was enjoying a drink with his best mate outside St Christopher’s Inn in Borough High Street on November 29, 2013, when a gang of seven men approached in single file, their faces hidden by hoods and scarves. Out for revenge on another man, who had allegedly attacked one of them a few months earlier, Aytach Lisani, 33, of Sir Francis Way, Brentwood, mistakenly stabbed Chris, 34, leaving his then four-year-old daughter Christina without a daddy.

The emergency services were called at 11.45pm but while they were on their way, CCTV footage inside the pub captured Chris’s last moments when he can be seen fighting for his life.

In order for permission to be given for the distressing scenes to be aired as part of a BBC documentary next month, Jean had to watch the video herself first.

“You could see poor Chris was in agony,” she said. “A lot of people are under the impression that it was a quick death and he didn’t suffer, but he did.

“You can see it in his eyes, they’re as big as saucers and he can’t breathe,” she added.

The London Ambulance Service treated Chris at the scene before taking him to the Royal London Hospital where he died just after 1am.

With those painful images in her mind,  Jean remains determined to share the truth of what happened to her beloved son to wake young people up to the real consequences of knife crime.

“It’s harrowing but that’s what happened to him,” said Jean, who has recorded a spoken word video about her experience to be shared with as many schools and youth groups as possible.

“My main aim is to try and make people know that the knife is not the answer,” she said. “All that bravado about carrying knives doesn’t make you any more of a man. Think of the consequences after you’ve used it,” she added.

The MET police have already asked Jean if they can use her video in talks with young people and it has been circulated to youth leaders in Southwark.

There are two men suspected of being involved on the night of Chris’s murder who have yet to be brought to justice. Jean is hoping they too will see her video and think again.

“I hope it will also get to them and make them think,” said Jean. “They’ve taken so much from us. At present they’re free but do they want to be looking over their shoulder for the rest of their lives. They’re better off coming forward.”

In addition to Aytach Lisani being sent down for 23 years for Chris’s murder, three men were found guilty of conspiracy to cause grievous bodily harm to their intended victim and two men were acquitted of the same charge.

To see Jean’s video, visit www.cutitout.org.uk and to get in touch with Jean about sharing her experiences with young people, contact news@www.newsatden.co.uk

Well what ever way you look at it Chris was an innocent victim, in the wrong place at the wrong time. He wasn’t involved in this feud between the 2 scum bags that carry knifes around stabbing each other. So stop trying to smear Chris’s name,
& if you know so much about this crime, why weren’t you in the witness box at the time, or sounds like you should have been on the other side of court??
Also don’t you have spell checker!!!

look Chris may have been in the wrong place at the wrong time but so were a lot of other people there that night and justice hasn’t been served right in my eyes one person committed a murder and all the other boys get tarnished as nasty murderers! How do you think there mum and dads and children are going to feel about that? Your just seeing this in tunnel vision if you ask me.

As for spell checker how about you stop being a keyboard warrior troll and meet up and we will have a spelling competition?

What a stupid comment to make Twosides! No matter how you look at it the “boys” all went out with the intention to either murder or hurt someone whether they carried a knife or not is completely irrelevant! They left him for dead so therefore that is not far off of murder. If they were innocent in the whole situation why not call an ambulance or the police?! Or if you know more information on this why not come forward? If they are innocent, why not come forward now and give further information and their side of the story?

Look Sarah your just being very small minded about the situation! How do you think the poor boys family felt when a random man sliced his face with a knife, from what I hear that’s what this was all over! Maybe if your face got cut you might look at this in a different prospective. My point is why put things all over the media and only tell one side to the story and not the full story!!

I feel for the boys families but not the boys at all as at the end of the day the real victims in this are Chris and his family! A sliced face is not acceptable but you can’t even compare that to a murder, a murder that was a mistaken identity too… The family need justice so of course it will be on all over the media, why would you tell the story of boys that ran and left a man to die even if someone’s face was sliced or they didn’t personally use the knife. I think you need to look up the term of being small minded as I only see one person on this page being exactly that… This is not about the boys, this is about Chris, an innocent man! The boys will not be getting any sympathy from me, especially until they bring themselves forward and take the punishment they deserve for even just leaving a man to die.

Look your obviously a friend of Chris’s or just a small minded little girl! they are all victims you melt maybe if you got your face sliced from top to bottom you might have looked at the situation from a different angle!

Yes your right and there’s is a man serving 23 years before he she’s daylight again! Ain’t that enough for you people?

And you’re clearly a member of the boys family….
This really shows your maturity you “melt”, someone has been murdered and you’re dishing the “insults”. Still doesn’t change the fact that these people were involved in an innocent bloke being murdered. A slice to the face is awful but he is still alive, Chris has gone and now his family are left with nothing but grief…
I’ll leave you to it now, as I think you need to take a moment to realise what Chris’s family are going through and how disrespectful you are to even be trying to smear Chris’s name.

Oh yes small minded Sarah before I go! Chris died from one stab wound from one person who is now serving life behind bars why do you think the rest of the boys should go down for murder? If you read my first comment you might not be a one-sided muppet!

LS you really are an ignorant f***! I never said the other boys should go down for murder but I think they should be punished for their crime of being involved and leaving someone to die. They didn’t call an ambulance that could have potentially saved Chris’s life!
I actually can’t even have a discussion with someone that is a thick sh** and so narrow minded. You won’t be getting anymore replies

Sarah it’s no point talking to people like 2twosides after all they don’t even put there real name that just shows what kind of people they are, the fact that it took 8 cowards to go after one person & out of the 8 of them, they didn’t get the right person!!, If your the type of scum that’s gonna use a knife on someone, & you stab & kill the wrong person, WTF !!.
As for small minded, don’t even go there, the boys couldn’t call an ambulance because they were too busy chasing the real intended victim into a nearby club, just goes to show how sorry they felt about stabbing the wrong person, there is nothing that anyone can say or do to put this right for poor Chris’s family,
& as for the other 2 still on the run, obviously got no concous there carrying on with there life’s, new girlfriends!! & left the other mugs to take the wrap, Nice One

Look Sarah if you look at my first post I said my hart gos out to Chris’s family and more importantly his daughter! Oh I forgot your a small minded person that’s in tunnel vision my fault!