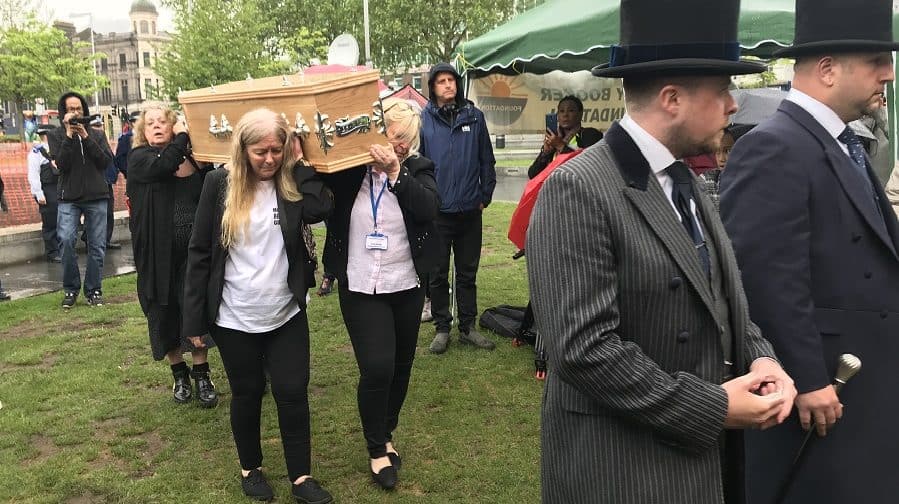 Mothers against Guns UK’s founder Lucy Cope joined other bereaved parents at a Woolwich Arsenal rally this weekend to stage a mock-funeral, highlighting the devastating consequences of the surge in violent crime across the capital.

Addressing the audience at the screen in Gordon Square, near Woolwich Arsenal station, Ms Cope said: “We need to stand united because if we don’t do it together, nothing is going to change.

“The perpetrators have become younger and so have the victims. So what are we gonna do about it?

“We need to stand up and make our government stand up. If you don’t want to take the job on Ms May, see you later.

“The next one that comes in better take over and do a better job.”

Two of Ms Cope’s sons were murdered. In 1998 her son Sean was stabbed in Walworth, and in 2002, her son Damian was shot outside a nightclub in Holborn.

After marching with a coffin, provided by undertaker Gary Fuller, Ms Cope gave an impassioned speech telling onlookers: “Don’t wait to have been in our shoes, because it ain’t nice.

“Don’t say it can’t happen to you, because if you ain’t got it in your borough it’s coming your way. It’s like a disease.

“And we need to have parents accountable for their children, we need a robust police force.”

She also called for frozen assets from criminals to be put back into stopping crime, and said the police and public needed to “stop being scared of racism”, and have an honest conversation about black-on-black gun and knife crime statistics.

Ms Cope told the News she believes the surge in violent youth crime is due to a “lack of facilities for young people there is no youth clubs, nowhere to go. They’re hanging out in what I would call a concrete jungle and there’s only one way to go and that’s into gangs.

Describing herself as “very disappointed” that Sadiq Khan could not attend, she said: “He is not in a strong enough or in a position to deal with the crisis we are now in”, before turning her attention to the Prime Minister , saying: “Theresa May needs to clean up her own back garden before she starts cleaning up someone else’s.

“She went to a task force to bomb Syria, but what about the young people dying on her streets in the United Kingdom every single day?”

At the rally, Brixton-based poet and community worker Michael Groce also performed a specially-written poem, and encouraged young people to turn away from crime.