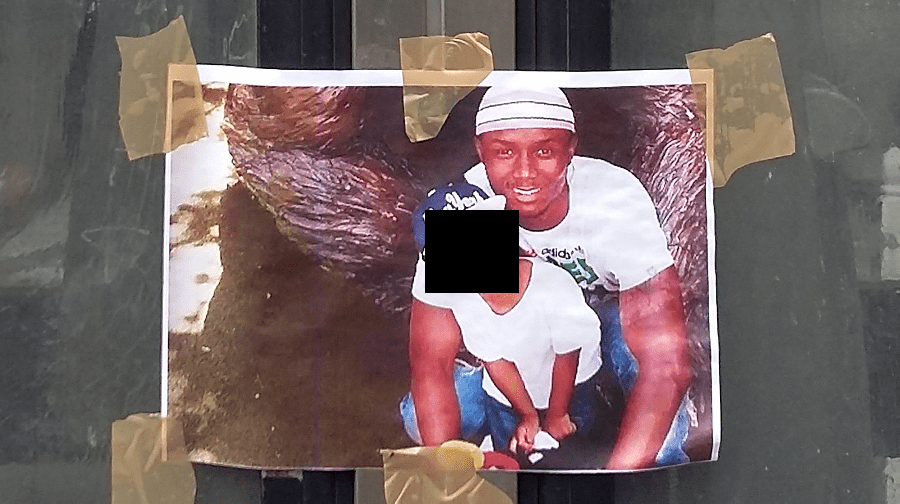 A photo of Bilal Kargbo, left at the shrine in Blenheim Grove.

Tributes have been paid to the 26-year-old father of three who was fatally stabbed in the centre of Peckham on Friday, April 28.

The victim was named in the media as Bilal Kargbo. He died at the scene after receiving two stab wounds to the arm and chest.

Police made two arrests on May 1.

Mr Kargbo, who lived in Borough, was pronounced dead at 3.51pm after collapsing in Blenheim Grove, a short walk from the phone shop where he worked. He was known as a musician in his birth country Sierra Leone, and recorded music under the name Billz with his partner Mohamed Sheriff.

Mr Sheriff wrote on Facebook: “I will never ever forget April 28, 3:51pm. The day I lost my brother…

“This can’t be true, this can’t be life, that can’t be my brother on the news. We had all these plans to change entertainment together, from the day we met we became brothers, shared the same ideas and believed in the same principles.

“I will keep the memories that we’ve had forever in my heart. You inspired me to be the best when you were alive and now you have inspired me to turn to Allah fully.”

His family has not yet formally identified Mr Kargbo’s body.

Alim Komora, who had known Mr Kargbo since they attended Walworth Academy together, told the Evening Standard: “There is nothing bad that I can say about him.”

Crowds attended a candle-lit vigil held in Blenheim Grove on April 29. Livesey ward Councillor Michael Situ said: “Saddened me to attend yet another prayer vigil for a victim of knife crime. We must continue to fight the scourge of knife crime in London.”

Two men were arrested on Monday as part of an investigation by Scotland Yard. A 22-year-old man was being held in custody on suspicion of murder, and a 28-year-old was arrested “on suspicion of assisting an offender”.

The crime scene in Blenheim Grove on April 28

A Met Police spokesman confirmed on Wednesday that the 22-year-old arrested on suspicion of murder will remain in custody, as detectives applied to a senior magistrate for permission to hold him for 72 hours after his arrest, while their enquiries continue.

The 28-year-old was released on bail on Wednesday morning to a date in early June.

On the day of the attack, an eyewitness who did not want to be named, told the News: “I couldn’t see them fighting but I could see bare people crowded around them. Loads of women came out of the salons. A lot of people were shouting.”

Mr Khan of Khan’s Bargains in Rye Lane said: “I didn’t see the actual fight, but I saw men from the car garage next to Bar Story were holding the boy after he was stabbed. He was holding the boy’s chest before the police came. The police came after a few minutes.”

Scotland Yard is continuing to appeal for witnesses. Detective chief inspector Dave Whellams said: “We believe the victim was involved in an altercation with another person prior to being stabbed. The incident drew a large crowd of onlookers and a number of members of the public were filming the incident on their phones.

“I am appealing directly to any witnesses – and in particular any of those people who have recorded footage – to contact police as soon as possible.”