Museum Opens its Doors to Refugees

Carpet-bombing the whole ground floor is a new artwork by Ai Weiwei of life-size images of bombs and missiles, including the V2 that terrifyingly took out parts of London, and the nuclear bomb that devastated Hiroshima. 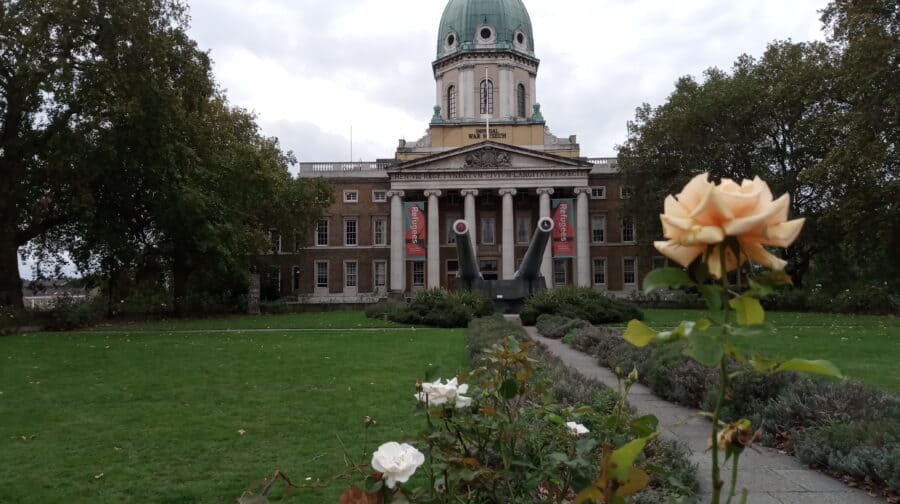 War has harsh consequences and the Imperial War Museum does not shirk from bringing those – sometimes hidden – realities back from the frontline and held up to the faces of those who only know conflict from Hollywood films and gaming, writes Michael Holland…

IWM’s new exhibition highlights the long-existing plight of refugees and is made up from different strands that place visitors literally face-to-face with those who have lived through the refugee experience.

Forced to Flee explores the reasons why people have sought refuge over the last 100 years, with timelines comparing the numbers of the displaced with the wars that destroyed their lives. Old footage and photos show them destitute and confused as they stand in a line, sit forlornly by bombed homes, or march to where they hope will be a safe haven, overladen with what they could salvage and carry.

Britain does not always come out well. A list of the refugee numbers that nations take in finds us way down in the rankings. Carpet-bombing the whole ground floor is a new artwork by Ai Weiwei of life-size images of bombs and missiles, including the V2 that terrifyingly took out parts of London, and the nuclear bomb that devastated Hiroshima.

In the ‘A Face to Open Doors’ section visitors can interact with a futuristic Border Patrol where movement is policed by intelligent AI machines. After it reads your face and logs your emotions, it decides which city you would be best suited to and then judges your honesty and trustworthiness to decide if you can migrate there.

I was denied entry to Mumbai and felt bad because the exhibition tells us that refugees were regularly denied entry because ‘they had dishonest faces’! Worryingly, this is the future. In a world where we have just seen young people’s lives ruined by machines marking down their exams and politicians blaming the ‘algorithms’, so they will hide behind algorithms when more lives are ruined and families unnecessarily divided at borders.

Life in a Camp immerses you in a refugee camp by utilising CNN’s pioneering panoramic video taken just days before the exhibition opened its doors to visitors. I sat there with camp life going on around me: someone cooked on a makeshift fire; people filled bottles with water at a standpipe; children smiled at the camera… You can see the resilience of mankind when faced with hardship. War doesn’t always kill the human spirit – other humans do that.

With racism on the rise across the UK, fuelled by a right-wing press and politicians demonising refugees. It is left to small, struggling organisations to reach out to those in need while Britain has many flag-wavers calling themselves patriots, but who share the same ideas as the Nazis our forefathers fought against.

The IWM’s Refugee season has heartbreaking exhibits from wars over the last century and I left there reflective and subdued. I hope many others visit the exhibition because now is the time for change and this goes a long way to making that change happen.

The Refugee season is on at the Imperial War Museum, Lambeth Rd, London SE1 6HZ until May 24th 2021. Admission: Free.

We should be near the bottom of countries taking refugees. If they were real refugees they would of applied for asylum in the first ‘safe’ country they arrive in. The fact they probably travel through six or seven countries and then illegally break into our country tells me these are not seeking refuge, but looking for a life where they know they will be given better treatment than the people born and bred in this country.