The seemingly-unofficial installment has intrigued residents and a Southwark historian 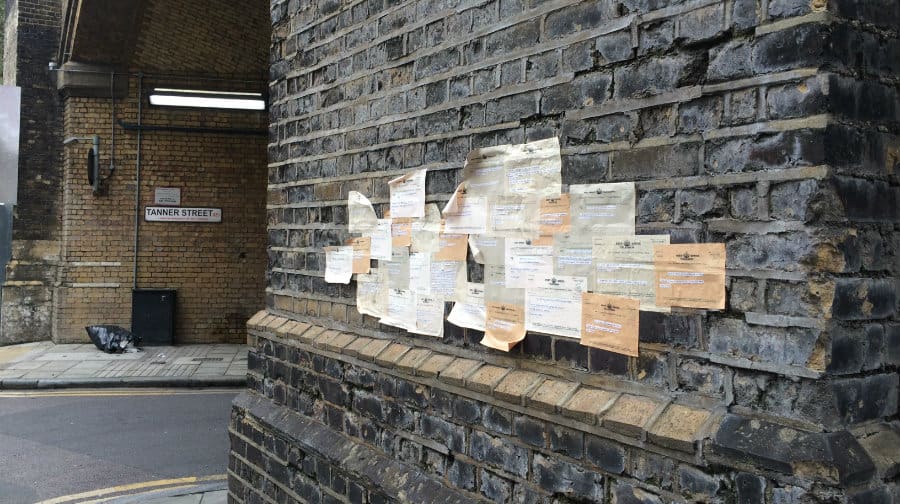 An unofficial ‘war memorial’ has intrigued Bermondsey residents since it emerged without warning or explanation last week.

The instalment, at the arches in the junction of Tanner Street and Maltby Street, features what appear to be reproductions of WW2-era telegrams sent from residents in the north of the borough.

The poignant messages reveal both the drama and minutiae of wartime life in Bermondsey, as well as the tragedy, grief and strength that permeated the borough during the Blitz.

Another says: “Bombing last night stop the dog died but we are all safe and thinking of you stop.”

Some informed residents of the deaths of their sons or fathers, while others relayed the destination of loved ones during the evacuation of children to the countryside.

One simple reads: “Trying to keep spirits high but I fear the worst.”

The telegrams portray the strength of Bermondsey resident during the Blitz

Southwark historian Stephen Bourne was mystified by the telegrams, which are unaccompanied by any sort of informative plaque or protective cover.

He told the News: “It is an odd one. It looks quite prominent and eye-catching display, obviously somebody wants people to look at them. But they look too clean to be originals – and if original, surely they wouldn’t just display them on a wall.

“It is interesting but it is also a big mystery. It would be good if someone reading this could explain why they were put up.”

An enquiry has been put in to the Local History Library in Borough High Street. If you know anything about these telegrams, or if you own some interesting wartime memorabilia, please email joey@www.newsatden.co.uk.

One of the poignant telegrams found in Bermondsey

Another telegram found pasted to an arch in Tanner Street