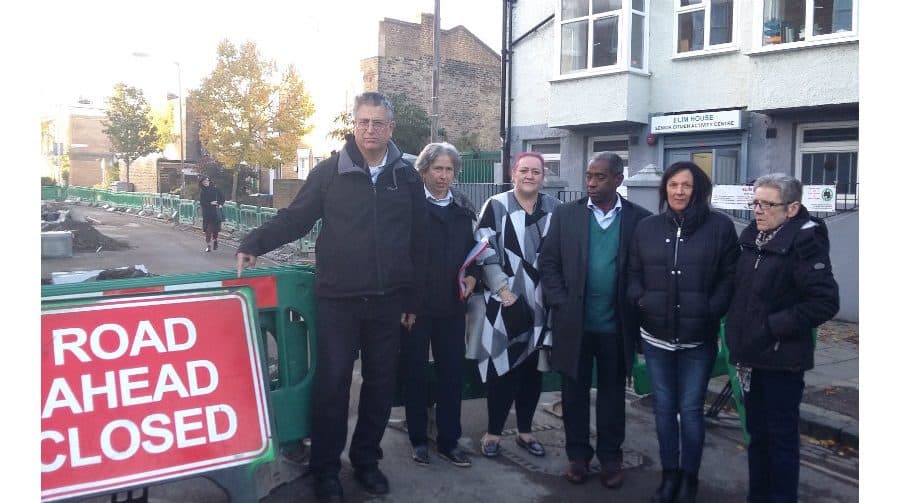 The council’s redesign of Bellenden Road has been a “nightmare” for residents and for users of an elderly and disabled people’s day centre.

The manager of Elim House Day Centre, Aubyn Graham, said Southwark Council’s scheme to widen pavements between the junctions with Highshore Road and Holly Grove in Peckham would pose a “health and safety risk”.

The pavement-widening works began in October, reducing the space for only one small vehicle to get through, which Aubyn said would cause chaos for the Day Centre’s three buses used to transport vulnerable people five days per day.

Aubyn, a former Peckham councillor, told the News: “I think the council needs to stop the works and review the health and safety issues of this failed scheme.

“Our three mobility buses and the Dial-A-Ride buses we use will have to vie with cyclists on the narrowed one-way street.”

Previously Aubyn had written to the News to say the lack of space would make it “almost impossible” for emergency and refuse vehicles to use the closed off section of Bellenden Road with adequate turning space.

A schedule of the works shows the section of Bellenden Road between Holly Grove and Lyndhurst Way was carried out between July and September – at the same time as the Lyndhurst Way and Highshore Road junction redesign.

Bellenden Road resident Kim, said: “I’m going to be left with nowhere to park once this is finished. I need my car because I have knee and back problems, and I look after my grandson every day.”

Elizabeth Pierce said she only discovered the plans after seeing a notice on a lamp post. “We had nothing through the doors and it was just lucky I noticed it,” she said.

The News contacted Southwark Council for a comment, but received no response at the time of going to press.