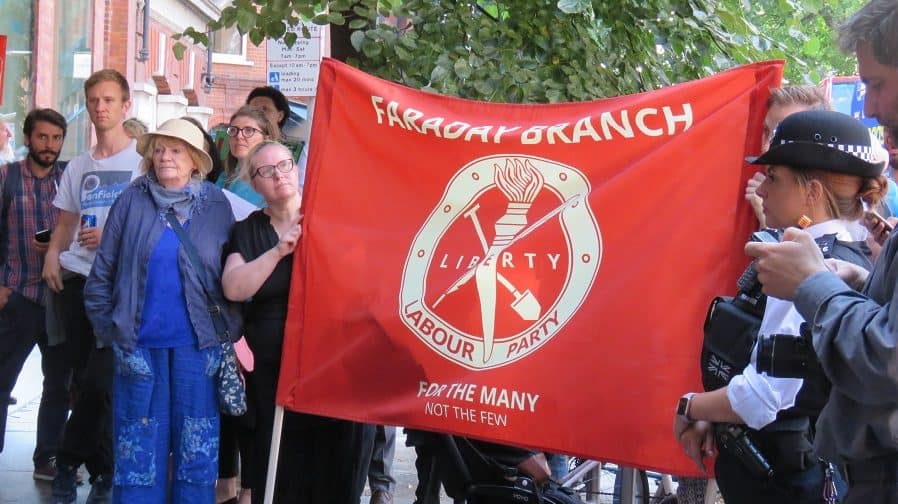 A Faraday Labour branch banner. at the Up the Elephant protest outside Southwark Council's Tooley Street offices on Tuesday, July 3.

Neil Coyle found himself in a twitter-storm today after hitting out at Momentum-supporting councillors and appearing to claim they are ‘bullying’ their colleague and planning committee vice-chair over this week’s Elephant and Castle decision.

The Bermondsey and Old Southwark MP took to twitter to share his views on a motion passed by the Faraday ward branch of the party, which called on Sadiq Khan to reject Southwark Council’s planning committee’s decision and push developer Delancey for an improved offer, as it ‘expressed extreme disappointment that Labour councillors voted for such woefully inadequate plans’.

Faraday Branch universally condemned the decision of the Planning Committee to pass the plans for the redevelopment of Elephant&Castle. The branch expressed extreme disappointment that Labour councillors voted for such woefully inadequate plans. We passed the following motion: pic.twitter.com/hUGqd3ujtY

Their actions came just days after their fellow ward councillor, Lorraine Lauder MBE, chaired the meeting which gave the project the green light – voting herself as one of four in favour and three against, with one abstention. The vice-chair took over on the night from chair Cllr Martin Seaton as his ward, North Walworth, presented a conflict of interest.

Two of Faraday ward’s three councillors, Jack Buck and Paul W. Fleming, have been vocal campaigners against the scheme, and have joined other Labour councillors in penning an open letter calling on Sadiq Khan to intervene, published shortly after the scheme was approved on Tuesday night.

Their opposition of Delancey’s proposal is in light of its non-compliance with Southwark Council’s policies on affordable housing, the deal offered to traders who will be displaced when the centre is demolished, and the impact on the wider Latin American community and people from older and ethnic minority backgrounds, who use its bingo and bowling facilities.

To be compliant with the council’s own policy, new developments should have 35% affordable housing with 50% of this set at social rents. In the case of Delancey’s plans for Elephant and Castle, the approved project will include 116 homes at social rent rather than the 165 needed to hit this target.

The Faraday branch said it ‘universally condemned the decision of the planning committee’, and ‘expressed extreme disappointment that Labour councillors voted for such woefully inadequate plans’. Camberwell Labour, have since passed the same motion.

But in a strongly worded tweet, MP Neil Coyle criticised the group claiming they were a ‘sad bunch of bullies’, saying ‘shameful treatment of a white working class woman councillor, telling them to “understand planning, grow up, and stop your bullying.”

What a sad bunch of bullies. Shameful treatment of a white, working class woman cllr. Understand Planning, grow up, and stop your bullying. https://t.co/0W3X90PZYf

Camberwell councillor Karl Eastham disputed the claims, arguing that accusations of bullying were being used to shut down debate.

Coyle’s controversial accusations also came in for criticism from Lib Dem councillor Alex Wade, who – in a nuanced stance – said councillors have to take ‘tough decisions’ but there was ‘no reason’ for Coyle’s reference to skin colour and the criticism’s of Delancey’s proposal were ‘perfectly valid’.

So many accusations of bullying. Sometimes, people disagree. Stop trying to silence people by calling them bullies. https://t.co/odFYTPLXOv

Cllrs do have to make tough decisions that won't always please the whole community or their party planning never pleased all. However there is no reason for reference of colour and the complaint is perfectly valid with some excellent points. Shame on Neil coyle

The fiery debate comes after Faraday ward councillors set up a petition to give the Labour party’s membership the power to elect council group leaders – who can then go on to become council leaders.

Last week Southwark Momentum’s Chris Bright denied a rift in the party – days after commentators accused Momentum of plotting to oust Harriet Harman from her Camberwell and Peckham seat, and told the News that there was a ‘broad consensus’ in Southwark Labour’s move to the left – and that Blairites were ‘coming round’.

The News contacted Neil Coyle MP, who was unable to comment.