Neil Coyle: ‘I was handed an iPad, given a locker and told to get on with it’

Six months into his new role as MP, Neil Coyle talks to the News about knife crime, internet trolls, Jeremy Corbyn and paperwork 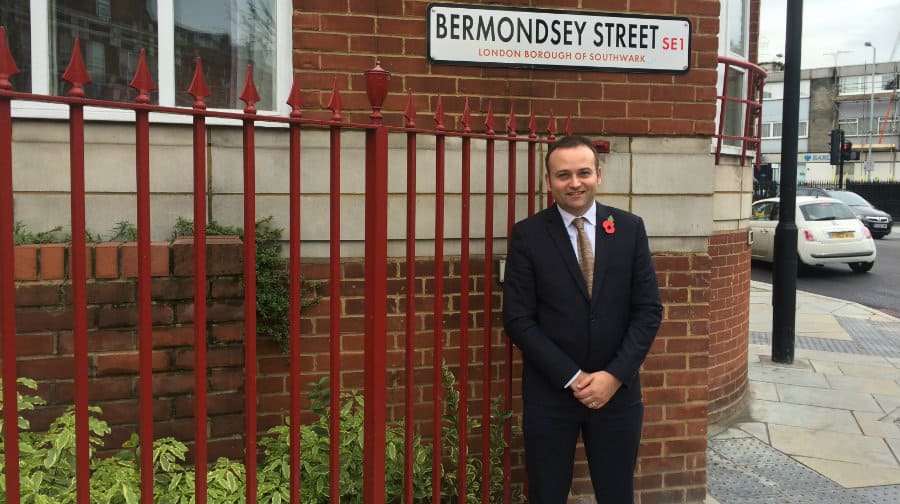 Six months have passed since Neil Coyle’s General Election victory but it seems that the Bermondsey and Old Southwark MP has still not had time to properly catch his breath.

“Whirlwind I think is a good word,” he told the News over a coffee in Machine, the café-cum-bike repair shop across the road from his current office in Tower Bridge Road. “Some of it was a learning curve, some of it is incredibly enjoyable, some of it is absolutely awful.”

The awful side of parliamentary life, he explains, is having to face “a Conservative government that is going to put through a lot of policies that are very damaging” for the borough. Already, however, he has had one major Westminster success.

He said: “Just this week I’ve had it confirmed that the government are accepting my amendments to the Welfare Bill, which means terminally ill people will get help quicker.

“As a backbencher and an opposition MP, within six months to have got the government to agree to use my amendment, it’s really good, I’m really pleased.”

The Newington resident admitted that the sheer pace of Parliament has taken some getting used to, after receiving 4000 pieces of casework from residents in just six months.

He said: “You’re just thrown in and told, pretty much, to do it yourself. I was handed an iPad, given a locker and told to get on with it.”

Outside of Westminster, the fledgling MP has also kept busy with events in Southwark – perhaps none more so than the tragic killing of sixteen-year-old Mohammed Dura-Rey, who was stabbed to death not far from Mr Coyle’s home.

Last month, Mr Coyle took part in an anti-knife march with the late teen’s grieving family, where he spoke out against gang violence and urged those with information to come forward.

He said: “How can you prepare yourself to talk to the mum or a sister of a sixteen-year-old stabbed to death? Just absolutely horrible. It was probably the most nerve-wracking thing I’ve had to do because there is nothing to prepare you.”

There are other issues that have taken some getting used to, including the great – and sometimes unrealistic – expectations constituents have for their new member of parliament.

He said: “People think you click your fingers and things get done. There are other people who assume that because you’re an MP you have to do exactly what they say.”

Some criticisms, however, have gone too far. While trolls on Twitter, Mr Coyle explained, can be ignored, people cross the line when they try to intimidate his family and invade his private life.

He said: “I was away recently and Sarah was on her own. It was after one in the morning and someone was trying to get in the flat, which is unacceptable. It was someone who wanted to have a go at me for something.”

He rejected the suggestion that he may be overstretching himself by carrying on his council work alongside his parliamentary responsibilities – not to mention his growing family, with he and his wife now expecting their first child. He said: “We’re not taking a council allowance, our loyalty as MPs is to people. There is very little power in the Labour group over us.

“Because I have casework staff I can do more – and I am doing more. As a councillor you don’t have the same stationary ability, for example, so I can print out hundreds of letters in parliament and get them out much quicker than I could as a councillor.

“In that respect I can reach more people, I can do it more often and I can do it faster and I have a team of staff with me – people who are paid to do this as their single focus. I think it is an advantage almost rather than a disadvantage.”

He said that he would only consider giving up his council work if his fellow Newington ward councillors, Eleanor Kerslake and Maisie Anderson, thought he wasn’t pulling his weight.

Mr Coyle also refused to dismiss or endorse Jeremy Corbyn – but did say that some of the criticisms directed at Labour’s leftwing leader were harsh.

He said: “There were four candidates in the final ballot. I don’t think any of them would have won us the 2020 election, because of what’s happening in Scotland the Tories gerrymandering with boundary reform.

“I’m a lot less doom mongering than someone like Simon Dansin, the Rochester MP who has been very, very critical of Jeremy. And to be honest I think Simon is overstepping the mark. Whether he agrees with him politically, he would not have treated another leader like this.”

Six months into his time as MP, Neil Coyle is still clearly finding his feet in Westminster. His appetite for change, however, can’t be denied.

When asked what he would put forward if he is chosen from the ballot in the next Prime Minister’s Questions, Mr Coyle found it difficult to choose just one issue to focus on, flitting from knife crime, to housing issues, to jobs, to pay and, finally, to morquio, the ultra-rare disease affecting six-year-old Millwall fan Harvey Brown.

“I’m fighting tooth and nail,” Mr Coyle said – and based on his first hectic six months of work, he certainly seemed to mean it.

Southwark NewsNewsNeil Coyle: ‘I was handed an iPad, given a locker and told to get on with it’