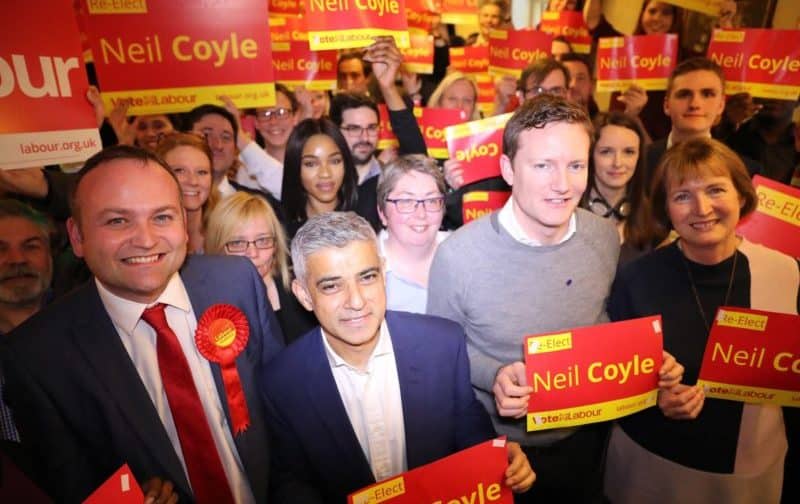 You might expect Labour’s Neil Coyle to be tired of elections by now.

Having been elected to the seat in 2015, this will be his second general election battle in under three years, alongside the referendum, EU elections and local elections.

While he did not vote for this month’s snap poll, he insists that’s not the case.

“No-one wanted this [the election],” he says – but swiftly adds that he has been relishing the opportunity to speak to people on the doorstep.

Coyle first got involved in formal politics as a councillor for Newington Ward from 2010 to 2016, and won the parliamentary seat first in 2015 and then in 2017.

(At the latter, he increased his majority to a respectable 13,000 votes.)

During that time, he has garnered a reputation as a fiercely outspoken backbencher.

On Brexit, Coyle is among the Labour Party’s most vociferous opponents of leaving the EU, and he has billed himself in this race as “the most Remain candidate.” Labour Party policy is to renegotiate the Brexit Withdrawal Agreement and put it back to the people in a final say referendum, with a Remain option.

This could, then, still lead to the country leaving the EU under a Labour majority government.

But despite criticism levelled that this makes Labour a ‘Brexit Party’, Coyle sees no contradiction between the party’s policy and his own personal stance that we should revoke Brexit.

“Brexit can be and only will be damaging to this constituency,” he says. “It’s appalling for any Government to undermine the people they serve.”

He is aware, he tells the News, of businesses not choosing to invest in Bermondsey and Old Southwark already, and jobs lost.

“I’m the most Remain candidate because I voted against triggering Article 50 – yes, Labour policy is for a referendum based around a deal that looks like single market alignment,” he adds.

“There will be a Brexit option and a Remain option, and I will continue to fight for the Remain option. The vast majority of Labour members will be campaigning for Remain.”

There is, he argues with a half-smile, an irony for Brexiteers in Bermondsey and Old Southwark.

Given Liberal Democrat policy – the most likely challengers for the seat – is to revoke Article 50 unilaterally if they win a majority, he insists the “realistic” option for Leavers is to vote for Labour.

“If people still want Brexit, [it’s] realistically the only way to get it in this constituency,” he says, as they would get a final-say choice and could choose to leave.

Another topic on which he has frequently spoken out is what he sees as failings by the leadership of his own party.

How does he square standing as a Labour candidate – which could help Jeremy Corbyn become PM – when he has frequently declared he does not think Corbyn is up to scratch?

“The manifesto I’m standing on would make a real difference to our community,” he responds.

“We’d get more police, we would get more investment in our schools, and we’d be able to stop the damage of Universal Credit.”

But Coyle says he is a pragmatist – and with just days before the election, he does not see Labour getting a majority.

“It’s the realism to know that at best, we will be delivering some policies from opposition, which we had secured, or in coalition government.”

He speaks of his frustration of the Labour Party not being in office – and “absolutely” agrees the fault lies at the leadership’s door.

“The aim has always been to have a Labour party that’s in a strong position… I’m deeply disappointed we’re not in a stronger position in this election,” he says.

“Many of our policies are very popular. But it does not take long knocking on people’s doors to find out what they think of the leadership.” Particular issues close to his heart that he thinks especially affect Bermondsey and Old Southwark are crime, universal credit, and housing.

He accuses the Government of failing to address the national problem of violent crime, but also stresses that crimes that police would consider “low-level” are also blighting people’s lives – such as drug use, anti-social behaviour and muggings.

He is especially scathing of Boris Johnson’s promise of 20,000 more police officers – saying the Government has cut 21,000 since 2010.

“It’s an admission they have screwed up badly and damaged people’s lives.”

Coyle vows to fight to get the full number of bobbies restored to the borough which he says have been lost as a result of cuts.

His anger at the roll-out of Universal Credit is palpable as he shows the News the foodbank that his staff operate from his surgery. (16,000 people in Southwark are on Universal Credit.

“It’s families with very young children who need nappies, mums who need toothpaste, it’s baby food… it’s life’s essentials that [aren’t there] because of errors in Universal Credit,” he says.

Housing is by far the most consistent issue he has faced as an MP – and he proudly points to Labour’s pledge to build 100,000 council homes a year, alongside 50,000 housing association homes.

“It’s exactly what a community like this one needs,” he says. He also points to a commitment by Labour to ensure that developments have homes on which local residents have first rights.

Coyle has previously come in for criticism for turning the air blue on social media, particularly around issues he cares strongly about.

He concedes that “there are some spats that probably shouldn’t have happened,” and has before told the News that he would moderate his language online.

But striking a more defiant tone, he says: “I don’t think I talk dissimilar to the vast majority of local people.

(He jokes: “There was once a man who called for straight-talking, honest politics.”)

“[But] if someone gets upset about something I tweeted, it’s not a big priority – there’s so much going on in real life.” Given that he has been an MP for the seat since 2015, are there any regrets he has about his time so far in office?

“One part of the job that’s surprised me has been the guilt,” he admits. “There’s always more you want to do.

“And on a personal level, if I did all of the things I’d like to do, I would feel guilt towards my daughter.” He has a young daughter, Esme, with his wife, Sarah.

But he lists things that he is fiercely proud of.

“Judge me on my record, I’m proud of my record,” he tells News readers. “The truth is that if they look at my record, their priorities are my priorities.

“The issues I have championed are the exact ones that people come to my surgery with.”