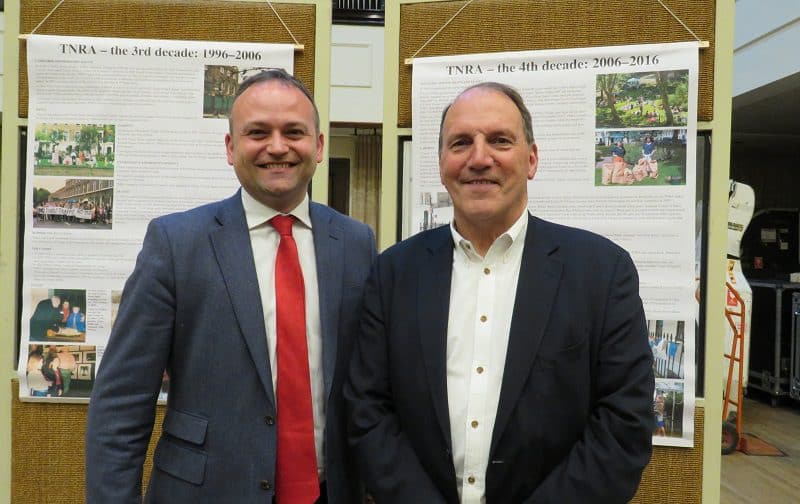 The first election head-to-head between Simon Hughes and Neil Coyle has framed the battle for Bermondsey and Old Southwark as a two-horse race between Labour and the Lib Dems.

The two took part in a Q&A organised by the Trinity Newington T&RA on April 27, held at the Henry Wood Hall in Trinity Church Square, SE1.

Simon (Lib Dems) and Neil (Labour) were given a couple of minutes to make their opening pitch to the 100 or so guests before them. Then it was over to the local residents, who fired off questions on everything from safeguarding EU nationals’ rights to congestion troubles linked to the Elephant and Castle junction redesign.

One thing that became clear was that a constituency as varied and diverse as Bermondsey and Old Southwark (BOS) will prove a tougher-than-average case load for any parliamentary hopeful. But both candidates had no shortage of anecdotes and stories to tell from their times here.

Neil and Simon are also outspoken Europhiles, which is more relevant to this general election than any other. But where they contrasted most was that while Simon could draw on 32 years of being this area’s MP, and a long list of achievements, Neil had all the most up-to-date experience of working in a borough where change has been constant.

Neil Coyle, MP for Bermondsey and Old Southwark, has blasted the Government over school funding cuts

What they said: Labour’s Neil Coyle on…

On the Lib Dems: “I’m sure [Lib Dem leader] Tim Farron’s views on sinning weren’t what you were thinking there”, Neil replied when both candidates were asked by an audience member who they should vote for. In his closing statement, he added: “I think Simon is trying to take you for fools. He is asking you to forget his record in government. I’m asking you to think of your neighbours who are still suffering from decisions his government made”.

Housing & regeneration: “I’ve fought for more affordable housing and council housing.” “The government’s Help to Buy scheme has helped no one in this constituency.”

Policing:  Neil said the borough has lost 200 police officers since 2016. He said he had worked with the borough commander to request extra resources from Central Command, to tackle increase in burglaries. He cited his casework with Mariama Kamara, the Walworth mum whose fifteen-year-old son Mo Dura-Ray was fatally stabbed in 2015.

Southwark Council and the Mayor: “I have worked hard in this constituency, and with the council. Simon, in the past, has just criticised them.” Neil added that he had “worked” with London Mayor Sadiq Khan, adding “because of him, we will have the Rotherhithe Bridge.”

Education: Neil drew on his campaigning against the proposed new national funding formula for schools. He said: “This government is committed to taking £5m per year out of secondary school budgets [in BOS].” and said Globe Academy would lose £150,000 per year.

Welfare: “In only two years I have changed the law… as part of the Work and Pensions Select Committee.”

Party leadership: “There’s one thing Neil and I have in common, we both nominated our party leaders.”

The 2010-15 coalition government: “It was a decision to go into government rather sit on the side lines”, adding: “this isn’t about the last election, it’s about the 2017 election.”

Brexit: “If Labour had put in half the effort we had done with campaigning against Brexit, we wouldn’t be in this mess.”

And he made the Lib Dems’ case for a second referendum on the Brexit deal, saying: “I don’t think we can tell people they will have no more say on the terms of the negotiations”, where Labour have “ruled out” having a second referendum.

Education and skills: After the university tuition fees rise under the coalition government, Simon said his party “wants to get rid of tuition fees over six years.”

Housing: “This Labour council has delivered less, not more, affordable housing. I will fight to make sure we do not sell our land off to investors and developers off-plan.”

The health service: “I was part of a huge national campaign [in 1997] to keep Guy’s hospital, and we won the battle to keep it, but under Labour we lost the A&E”, and said “we need to put more money into health and social care.”

Transport: Simon said he was “at the start of the campaign to extend the Bakerloo Line” and fought to get a Jubilee Line station for Jamaica Road.

Local democracy: Said the Southwark Lib Dems believe in “giving local people power”, and pointed out the scheme to create eight local Community Councils in the borough, which Labour reduced to five.

Tax: “The Tories took our policy of raising the tax threshold for low owners.”