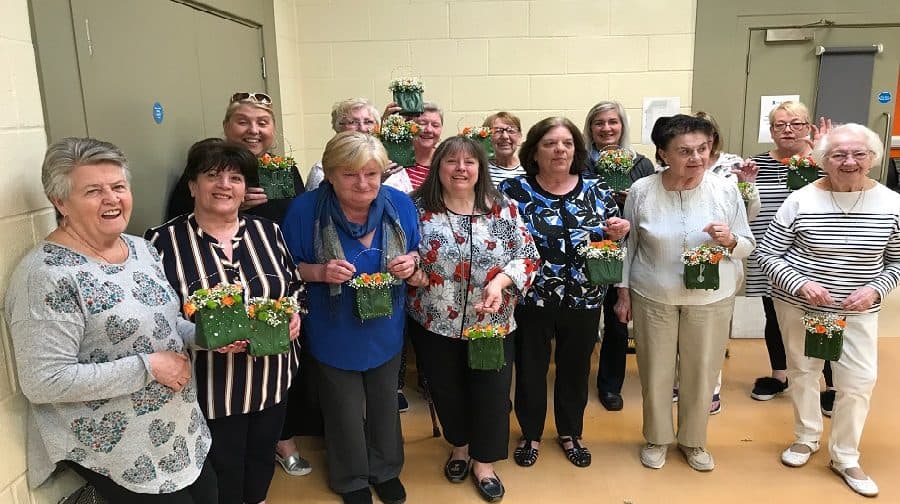 A group of older ladies taking part in weekly flower arranging sessions in Rotherhithe have told the News how special the club is to them– and their hope that local businesses could help them raise funds for a special day out.

Nellie’s Club was set up by florist and teacher Debbie Western, aged 58, to help ladies over 60 get together at Docklands Settlements to learn flower arranging and socialise with each other.

The News was kindly invited to last Friday’s session, where the group made a beautiful decoration called “The Handbag”. Ladies get to grips with this week’s arrangement

There was lots of laughter in the room, but it was also clear just how much the weekly outing means many of Ms Western’s learners.

Pat Barnes, who has lived in Bermondsey for “30-odd years”, said she liked the community-feel and mixing with people from the same age group and “having a bit of fun”.

Linda Lever from Shipwright Road, said she joined “to meet friends and socialise with people and have a nice time”, and had really enjoyed all the special events including raffles, bingo and a Christmas lunch.

She described Nellie’s as “like a little community”, saying it was particularly important for “people who are not well and lonely.”

Anne Kenny, who is a carer for her husband, had never tried flower arranging before joining Nellie’s.

She said: “It gives you something to focus on. It is my time, time when I’m not looking after somebody.”

Jean Mathers, from Rotherhithe Street, said “I can’t go to many things because I can’t see well, so I sit at the front. It is nice at the end when you produce something.”

While eighty-three-years-young Joan Earl, who has lived in her flat on Rotherhithe New Road since she was a baby, told the News she had enjoyed learning a new skill.

Her father had been a docker and she also worked locally, at Arthur Smart flag makers in Bermondsey, for 36 years.

As she put the finishing touches to her floral decoration, she told us all about some of her favourite moments at work, recalling the time she met the Rolling Stones, who were playing in a studio underneath the building: “While I was splitting material Charlie Watts asked me “How do you keep a straight line?” and I replied “same as you, with the drums. It is practice”, and he said “touche!” Debbie founded Nellie’s club after her mother passed away, saying her mum had always supported older people in the community.

The florist, who taught at Southwark College for 22 years, says she is delighted with how the club has grown “I’m really happy with the way it has developed and it still has got so much more potential.”

Two weeks ago, the club – which has members from many different nationalities and cultural backgrounds – joined forces with the Okey Cokey Club, run by Age UK Bromley and Greenwich to meet with Nepalese Ghurkha veterans, wives, widows and families in a special event at Wade Hall on the Dickens Estate.

The Okey Cokey club’s project co-ordinator Pauline Cahill, is Debbie’s best friend, and they hope they can hold more joint events like it.

Whilst reminiscing with the News about the beanos dockers would go on in days gone by, the ladies said they would love to have another day trip away, joking they could make it their own “floral beano.”

If you’d like to join or donate to Nellie’s Club, please visit: info@debbiewesternflowers.co.uk