Pies sold out in first week after franchise opened in Borough 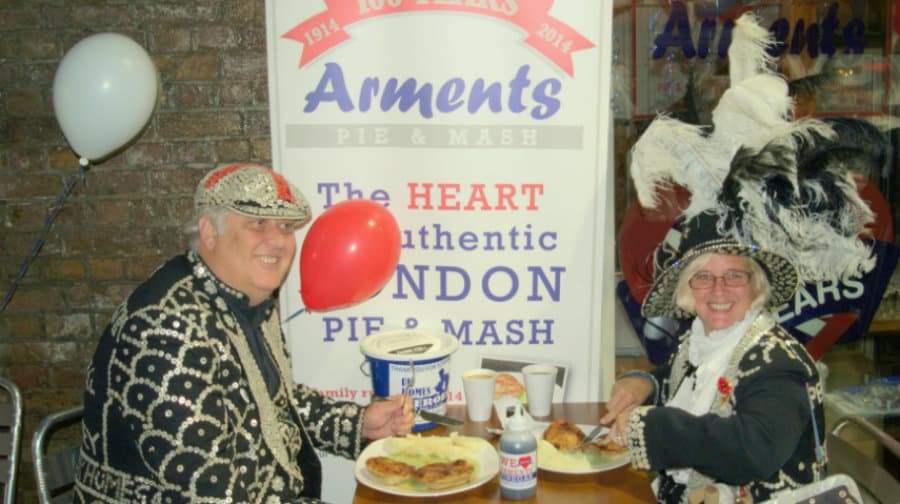 Traditional pie and mash made in Southwark for more than a hundred years sold like hot cakes when a new branch opened on the tourist trail last week.

The new Arments’ franchise in Borough has proved so popular since it opened its doors on Wednesday that on Friday the family business’s home in Westmoreland Road (which makes the pies for both branches) sold out of pies and had to close its doors for the first time in living memory.

The Mayor of Southwark, councillor Dora Dixon-Fyle, cut the ribbon at first branch of the historic firm set up in 1914 to be opened outside of the Arments’ family, on Wednesday morning before the hoards literally ate all the pies.

“We were all run off our feet but it was a roaring success, “ said Cheryl Arment, who was joined by pearly king, Jimmy Jukes, and pearly queen, Michelle Thorpe at the launch in Green Dragon Court.

“We just couldn’t get the pies out of the oven fast enough – it surpassed anticipation and continued all week,” she said.

Roy and Cheryl Arment signed the licensee agreement last week with Farhen Enver, who will now sell pies baked at the Walworth HQ, to tourists and City workers on their lunch break. “I know we provide the real genuine cockney pie and mash, it’s not an imposter, and for people to experience that as it should be is brilliant,” Cheryl Arment told the News last week.

Sounds like we have to get ourselves down to Southwark and rate these pies for http://www.pierate.co.uk!

MInCED BEEF pie, peas & chips cup a tea followed by a nice apple pie, how much for that? Hipster prices or ordinary ppl prices? £6 or £18 ?