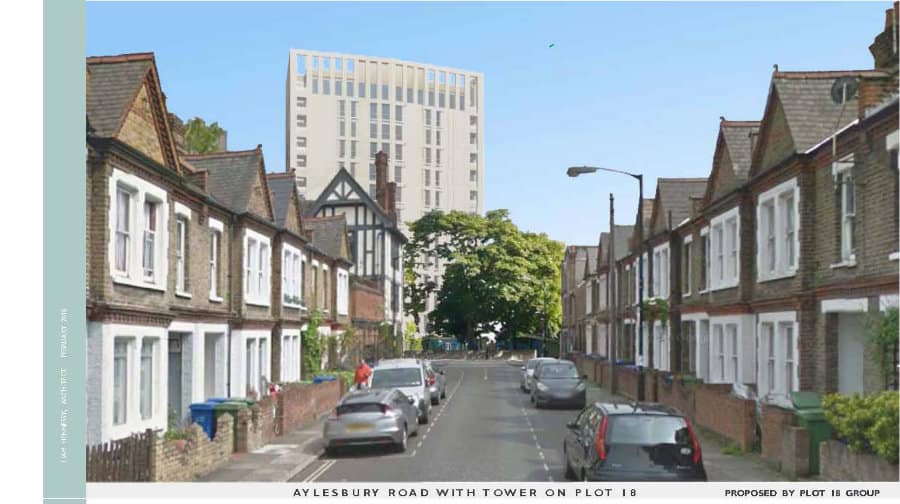 An architect is battling  developers who plan to build a fifteen-storey block of flats at the end of his street – claiming the proposed building would block daylight from  a new public square.

Aylesbury Road resident Liam Hennessy, 61, who has designed theatres in Singapore, Melbourne and Belfast, has taken up a crusade to get Southwark Council and Notting Hill Housing Trust to re-think their  scheme.

The proposal is for four blocks of four, six, seven and fifteen storeys lined in stepped formations, and contain 116 units on the parcel of land between Dawes Street, Thurlow Street and Inville Road known as ‘Plot 18’.

Liam said: “A lot of buildings in London have names like The Gherkin or The Shard. I’m calling this thing The Thug. Their idea for the building and the community space beside it isn’t bad in itself, but they’ve gone about it all wrong.

“It would be acceptable if they shifted the entire thing 50 metres to the side, so the building’s edge touches Inville Road. In that position it will replace the vacant two-storey row of flats which is currently a brown-field site.

“In the place I’m suggesting it, just 50 metres to the side, it would instead be parallel with Merrow Street and Inville Road, not blocking anyone’s view, and would mean the public space would get all the sunlight in the world. And it means they would get to keep the grassy areas and trees that already exist. I’m worried that people won’t understand the problem, but as an architect I think this is a two fingers up to our neighbourhood.”

Liam and his neighbours were also “shocked” by the proposal, because they say they had been shown so little about what it would actually be like.

“I only heard about it from a friend, so I decided to have a look at it myself,” Liam said.

Karen Seago, one of Liam’s Aylesbury Road neighbours, also said the street felt unhappy not to be included as stake holders in the planning process.

“If we had known about this development and been consulted properly we would have made our objections far earlier,” Karen said.

“It would be great if the council asked Notting Hill to reconsider their plans for Aylesbury Square, and include the residents in what their overall planning views are for the borough.”

A spokesman for Notting Hill said: “The current plans for plot 18, which will include a new library, medical and early-years facilities, reflect feedback from stakeholders, including local residents, with whom we have been consulting since 2014.

“We have held a total of 17 consultation events, most recently a workshop in February with residents from Aylesbury Road, Merrow Street and Wooler Street, where we found common ground on design changes to the buildings facing the conservation area.

“Our aim throughout has been to create the best solution possible for everyone living near or in this important new neighbourhood centre.”

Cllr Mark Williams, cabinet member for regeneration and new homes, said: “This site is key to deliver real benefits for local residents, including a modern medical centre and early years centre, as well as a brand new library.

“This builds on the outline planning approval that Notting Hill received last year. Local residents have been consulted and the majority who are directly affected by the proposals are supportive. Any impact on residents will also be addressed through the council’s planning process.”