When they were evacuated to Hailsham, the girls’ mother Annie was insistent that they would not be split up 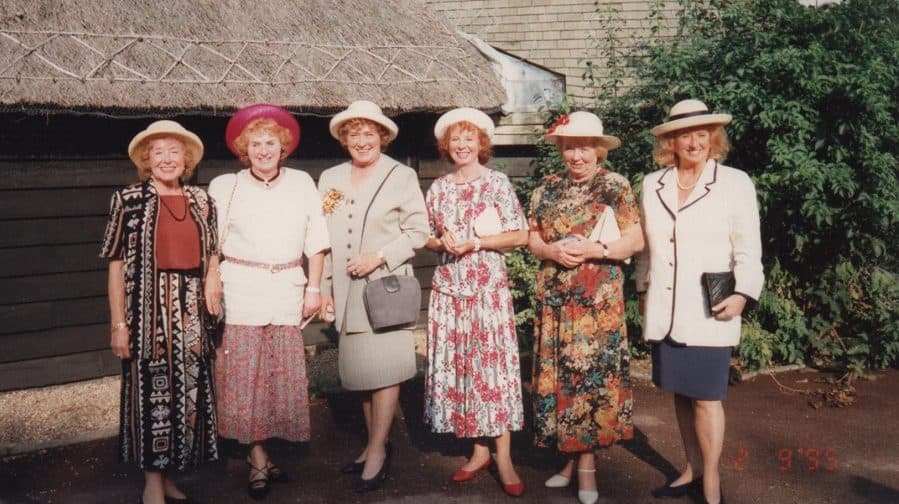 Six Bermondsey sisters have shared the story of how they were left to bring themselves up after their mother died during World War Two.

The eldest of the Jarman sisters was just sixteen, and the youngest two, when their mother Annie died of tuberculosis in 1941.

The story of the close-knit family has been documented in The Sisters of Battle Road – written by author and journalist Jim Maloney, son of the fourth-eldest sister, Kath.

The Jarmans grew up in a house in Abbey Street before they were evacuated to the countryside in Hailsham, Sussex, with their mother at the outbreak of war.

Their father, Pierce, who served in the First World War, was a gas meter reader for London Electricity Board at the time and had to stay behind in Bermondsey to work.

When they were evacuated to Hailsham, the girls’ mother Annie was insistent that they would not be split up, but without anyone willing to take on an entire family, they had to spend a couple of nights in a church hall.

“Fortunately, a couple of days later the local authorities found them an empty house,” said Jim, who grew up in Bermondsey but now lives in Kent.

“There were the six girls and their mum and another family all living in this house.

“Two years later, in 1941, their mum died of tuberculosis and so they brought themselves up for the rest of the war even though they were very young then.”

The sisters were just sixteen, fourteen, eleven, nine, seven, and two when their mother Annie died on June 12, 1941, aged 47.

“Mary, the eldest, took on the father role and worked in various places and then went into the Land Army, and Joan, the second oldest, became mum to them at just fourteen,” said Jim.

“They were all taught by their mother to cook and sew and make and mend and they can all make clothes.”

Kath, who is now 85 and the only sister to still live in Bermondsey, recalled being teased by children in Hailsham because they all had ginger hair.

“I was walking along with Pat in town and a crowd came towards us and we thought they were going to start,” she said.

“I took my hanky out of my sleeve and I said to Pat ‘hold my hanky’ and as I said that they all thought I was going to go for them and they all ran away.”

Most of the sisters liked Hailsham and the house they stayed in on Battle Road which had a garden rather than the back yard they were used to back in Abbey Street.

But Sheila missed Bermondsey – and they all worried about their dad.

“Sheila missed Bermondsey very much and wanted to come home,” said Jim. “It was a strange place to be evacuated to because the German planes flew right over them and they would see some incidents and aerial fighting.

“Their dad was back in Bermondsey and they were worried about him, although he visited his daughters at the weekend.”

The girls had all grown up by the time they returned home to London after the war in June 1945. By then, Mary was twenty, Joan, eighteen, Sheila, fifteen, Kath, thirteen, Pat, eleven, and Anne, six.

Kath can still remember the train journey home and arriving in London after being away for so long.

“I remember sitting on the train,” she said. “My Aunt Rose came and got us. My dad wasn’t there.

“We got out at London Bridge and you could smell the bacon from Sainsbury’s and vinegar from the factory and all sorts of smells.

“It all seemed very different from the country smells that we had got used to. I remember when I went back to school that a lot of my old friends thought I sounded posh.”

Sadly, during the war their home in Abbey Street was hit by a bomb so when they returned they all moved into a house in Lynton Road.

They lived together until one by one each sister got married – with four of them marrying four friends who used to go to the Fisher Club in Druid Street.

“I think that experience really helped to bond them and they are still really close today,” said Jim.

“Most of them live nearby to each other, Mum is the only one who lives in Bermondsey, and they visit each other regularly are all on the phone to each other every day.”

Kath married Gerry, a docker, and the couple still live on the Neckinger Estate, where Jim grew up.

After the war, Kath worked as a dress machinist, and later for NatWest bank.

Jim Maloney, author of The Sisters of Battle Road, aged 56, lives in Kent with his wife Alison and their two children.

The Sisters of Battle Road by J.M. Maloney is available on Amazon. RRP £6.99