A fish Supper and a Chippy Smile By Hilda and Cathryn Kemp is published in paperback by Orion Books priced £6.99. 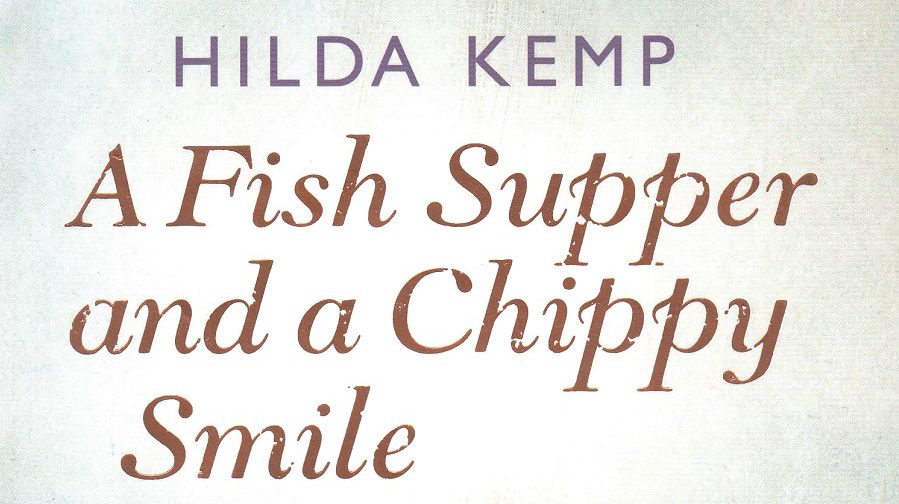 In post-war Bermondsey, everyone knew Wally’s Fish and Chip Shop in the Old Kent Road. People queued down the street most nights and flocked there from as far north as Rotherhithe and as far west as Brixton, to get a bag of chips fried in beef dripping and wrapped up in that day’s newspaper.

Dishing  out an extra portion to her hard up customers so they could feed their kids, was Hilda Kemp  – or ‘ooray ‘ilda as her boss Wally came to call her… and his beloved greyhound.

The story of Hilda’s violent upbringing in Bermondsey was told in Hilda’s childhood autobiography, ‘We ain’t got no drink, Pa’. Now her granddaughter Cathryn has fulfilled Hilda’s dying wish by telling the story of her adult life on the Redriff Estate and behind Wally’s serving counter in ‘A Fish Supper and a Chippy Smile’.

Even when Hilda was eight months pregnant with her third child, she still walked the thirty-minute route to and from her home on the Redriff Estate and the shop in the Old Kent Road. She would pass the many bombsites on the way, in which the children used to play, and take in the familiar smells of the soot and coal from the factories, the bitter stink of the tanneries and the sweet vanilla smell pumping out of Peak Freans.

Working at Wally’s six days a week, Hilda got a glimpse into the lives of her regular customers.

Like ‘Old Man Bill’, who was ‘a true east end character’. Living alone in his eighties, Bill arrived at the chip shop at 5.15 sharp every evening for a meat pie and chips with a pickled onion – regular as clockwork. Hilda would make a great fuss of him every time, wondering if she might be his only human contact. The only thing she knew about him really was that he had fought in the Boer War and that he had once been married. Hilda always wrapped his hot dinner in the sports page of the paper so he had something to read afterwards.

No one had very much in Bermondsey and Rotherhithe in the 1940s. Most scraped by each week, with a little help from the‘Uncles’ (pawn shops) if the cupboards were bare and buying the kids clothes through the ‘Provy lady’ (Provident Financial doorstep lender) for a few pennies a week.

The queue of locals in the chippie was no different. Queenie and Jack had seven children, lost three as babies and struggled to feed the other four on the pittance Jack got from doing odd jobs. They lived in the back of a bombed out tenement in Bermondsey with not a clean piece of clothing between them, but they never complained. Queenie always had a smile, even if it was with black teeth.

In the summer of 1950, Hilda and her husband Bert fell on their own hard times. Bert had just got a job as a meat delivery driver at Smithfield Market when an unofficial strike was called. No one would be paid until it was over. There was no Job Seeker’s Allowance or crisis welfare payments to keep you going in those days, so if you didn’t bring the money in there would be no food on the table. With Hilda heavily pregnant and Bert out of work, the spare chips she brought home at the end of her shift would not stretch to feed the family. For three weeks she eked out the cupboard scrapings until there was literally nothing left. With her wages just barely covering the rent, there was no money for food and Hilda was too proud to ask her neighbours for help, as a lot of them were in a similar position. As she wept in despair at her kitchen table, there was a knock at the door. When she answered, a parcel of bread, sardines and Bovril had been left on the doorstep for her.

That got them out of a tight spot but they were still on the breadline for weeks to come and like so many mothers then, Hilda skipped meals so her children could eat. After giving the last slice of bread to her son Albie, who was seven at the time, she sent him out to play. He came back in unexpectedly to see her eating the scraps of leftovers from his plate. Her face reddened with “the shame of not having enough money to feed your own child”. The realisation spread across his face as he spluttered out: ‘You said you’d eaten earlier’.

Hilda, who had grown up in a slum, was used to just surviving from one day to the next and in a few weeks the strike had ended and life went back to normal With just about two pennies to rub together Hilda counted herself lucky to have a good husband, a home, two children and one more on the way. “I might not have had cars or jewellery but I had what mattered the most: I had love, and I had it in abundance,” she told her granddaughter.

Working in the best chippie in town had its advantages, not least the free leftover chips to take home. Owner Wally and his wife Betty also gave Hilda and her family their first glimpse at a television set. In 1954 Wally invited them round to check out his new Motorola, which he described as ‘Top spec – absolutely the best television on the market’. As Hilda and Ted had just spent months paying off a radiogram, even the idea of having a television in your house  seemed out of this world – certainly out of the world of the Redriff Estate.

“Gawd it’s a miracle,” stuttered Hilda as the light came on and there appeared a girl with long hair holding a piece of white chalk against a blackboard. Albie jumped up and down in excitement and the adults spent over an hour staring at the BBC holding screen in amazement.

The television was a sign the shop was doing well. But as the Krays and the Richardsons started to rule the roost, this made Wally very nervous that his success would make him a protection racket target. As it happened it was Hilda and Bert who ended up getting a knock at the door from a shady character in a whistle an’ flute. Sidney used to work with Bert on the delivery lorries but now he was on their doorstep in the dead of night to call in a favour. Producing a bulging black bag in their hallway he asked them to ‘look after it’ for him for a couple of days. Unsure of the consequences of turning him down, they accepted and put it out of the way until he returned. Several days later Sidney came for his bounty and Hilda handed it over, saying neither her nor Bert had so much as peeked inside. Amused by her honesty and naivety, he unzipped the bag to reveal wads of blue bank notes in pristine condition. He handed a bundle to her and let the notes scatter everywhere.

“Well blow me,” thought Hilda. “I’d never seen a five pound note in all my life and here there were hundreds of them covering my floor.”

That was enough to signal to Hilda that life in London was changing. The old close-knit community leaving their doors unlocked was a thing of the past and it was time to get out.

The family moved to Surrey and a few years later Wally and Betty moved to Carshalton, marking the end of an era as the best chippie in Bermondsey closed its doors.

A fish Supper and a Chippy Smile By Hilda and Cathryn Kemp is published in paperback by Orion Books priced £6.99. It is available to buy from all online bookshops, including Amazon.