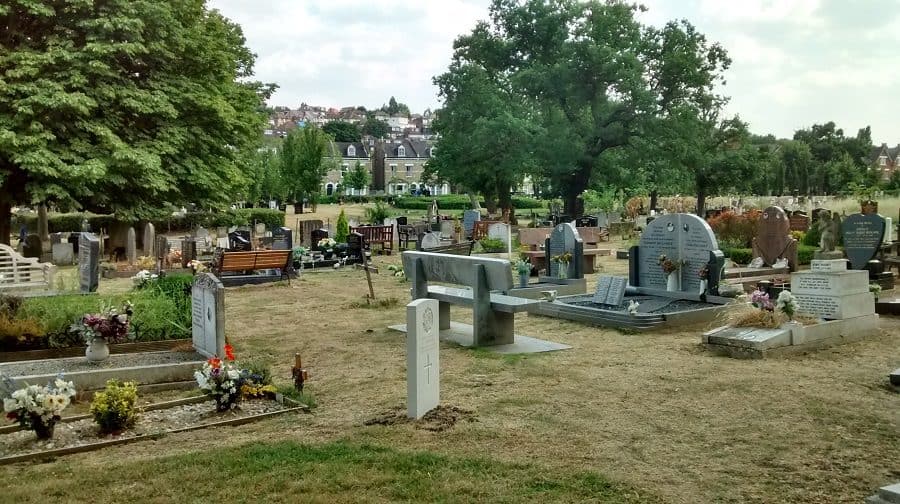 Previously, the fallen were commemorated with a memorial screen, but now will also be marked by the distinctive white headstones from the Commonwealth War Graves Commission.

The new monuments are part of a wider cemeteries regeneration by Southwark Council, which has agreed with the commission that no war graves should be disturbed during planned works at Camberwell Old Cemetery, no burials will take place above war graves, and that previously inaccessible graves will be marked.

The commission says plans are underway to mark many more graves in Southwark in the coming months. Peter Francis, from the commission, told the News: “Many people probably only think of our large war cemeteries in France and Belgium when they think of the Commission but we have more than 170,000 war graves here in the UK – the vast majority of which are in cemeteries and memorials not owned or directly controlled/maintained by the CWGC.

“We are therefore heavily reliant on the excellent relations we enjoy with local authorities – like Southwark – or even individuals to ensure our war graves receive the care they need and deserve.

“The Commonwealth War Graves Commission is delighted to be able to mark these 24 war graves with headstones for the first time – just the first phase of our work at Camberwell.

“Although these individuals were always commemorated by the CWGC on a memorial within the cemetery, there is something special about being able to mark their resting place.

“It is our hope that many more people will come to visit the war graves and discover the human stories behind the names engraved in stone.

“In so doing, we will ensure those who paid the ultimate sacrifice for us in two world wars will never be forgotten.”

The commission marks the graves of the war dead, who died in service whether in combat or through illness.

Those buried in the UK often died of wounds they were sent home to be treated for in hospital, in training accidents, or disease – such as the Spanish Flu pandemic from 1918 which killed 50 million people worldwide.

The buried come from all over London and the south-east, including the Military Medal awarded Private William Blake, from Guildford, but also many heroes from Southwark.

They include Private Frederick Blute, who died aged 52, on January 24, 1916, who had lived on Bells Garden Road in Peckham.

The new gravestones come amid a long-running campaign from the Save Southwark Woods Group to stop the council’s redevelopment of Camberwell’s cemeteries and declare the site a Memorial Park Nature Reserve.

The group is against creating space for new graves and cutting down existing trees, although Southwark Council has maintained that more new trees will be planted than uprooted.

Cllr Richard Livingstone, Cabinet Member for environment, transport management and air quality, said: “Since the start of the project to bring this area back into use as a cemetery the council has been working closely with the Commonwealth War Graves Commission, and we will continue to do so.

“In the past the sacrifice of those who died during war has been recognised with a memorial wall at the entrance to the cemetery, in common with other cemeteries across the country, as many of those who died are buried in the public graves, which contain a number of other burials and where headstones were not previously allowed.

“The CWGC and the council have now agreed to mark the space above our war graves where possible and, where no markers currently exist, to recognise these graves with Commonwealth War Grave markers.

“Southwark Council is committed to creating burial spaces for residents who want to be buried locally, where their family may be buried, and in a place where relatives and local people can come and experience nature and tranquillity.”