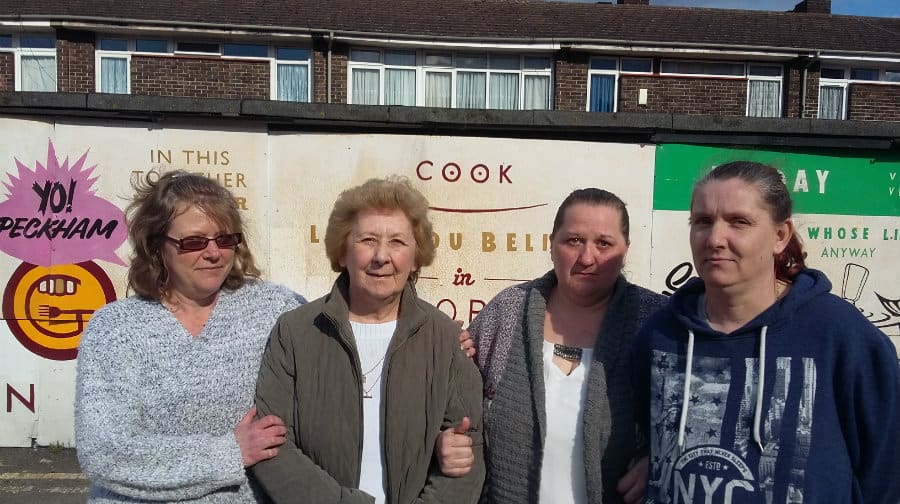 Families on Peckham’s Atwell Estate say they feel ‘disregarded’ by the council, after plans to put new shops and 67 flats at the foot of their gardens were unveiled.

Members of the estate’s tenants and residents association (TRA) showed the News copies of Southwark Council’s draft plans for three blocks of four-to-seven-storey flats. They indicate applications for the flats, which would be built on top of Copeland Road car park, were due to be submitted last month.

They were also consulted on a scheme called The Palms, which would see their own garages in Bournemouth Close become rows of retail units designed by Tree Shepherd architects. The first businesses to be offered these units could potentially be the evicted beauty salons and cafés from the soon-to-be-demolished Rye Station Arcades.

Among the residents’ list of reasons to be fearful is the sudden loss of any nearby parking space.

Seventy-three-year-old Shirley Neild, the Atwell Estate’s TRA chair, said: “There will be nowhere for us to park, or for our families when they want to visit. There are elderly people here who need carers or have families who come and take care of them, where will they go? We’ve had three meetings with the council and the architects, and all they do is shrug their shoulders and say they can get the train. And what if one of us needs and ambulance or a fire engine needs to get on to the estate? With all the shops lined up there will be no way for emergency vehicles to get to our homes.

“Surely we should be allowed somewhere to park? It’s like they’re trying to take everything away from us.”

Also in the draft plans were suggestions for roof-top gardens, communal court yards, and a five-a-side football court.

Another Atwell resident, Sharon Smith, 44, said: “They keep saying to us ‘we want to hear what you want’ but they know we don’t want any of this, so they’re determined this is going to happen regardless of what any of the people here think. So we’ve asked them for things like security gates at the entrance to the estate, so people drinking or messing around don’t try and get in, and to only give licences to the bars that won’t let them stay open too late, but they just said they ‘couldn’t promise us anything’.

“These new cafés are also going to be three metres taller than our garages, so our bedrooms will be staring straight at them. This is the council’s plan and it feels like they just aren’t listening.”

Councillor Mark Williams, Southwark Council’s cabinet member for regeneration and new homes, said: “This area is well served by public transport and we want to encourage more people to walk and cycle.

“We have looked at parking provision across Peckham and there are a number of underused car parking spaces, so even with the changes we are proposing there will still be spaces available.”