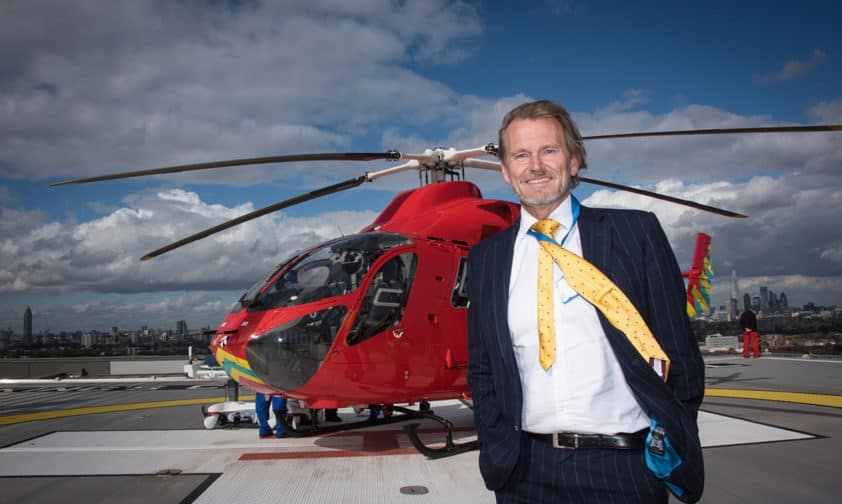 Rob Bentley, on the King's helipad

The helipad at King’s College Hospital will now operate 24/7, making it the first in London to fly-in patients throughout the night.

During a two-year trial starting imminently, the trauma centre will be able to take critically injured patients from across the south east by air between 9pm and 7am, after approval from Lambeth Council.

The helipad on King’s roof opened in 2016 and since then has cut the time it takes to transfer patients from helicopter to hospital by 25 minutes.

Previously, the air ambulance would land in Ruskin Park, next door and then travel a short distance by busy roads.

Until now, London was the only European capital not to have a similar helipad operating throughout the night.

Rob Bentley, a surgeon who specialises in head, neck and facial surgery, and is clinical director of the South East London Kent and Medway Trauma Network, committed to raise the funds needed to put the helipad in place, with the aim of eventually making the service 24/7.

He said: “This is a significant move forward and fantastic news for the patients we serve.

“People requiring trauma care in Kent and Medway will now have the same access to highly specialised, timely treatment as those in London, which can be the difference between life and death.

“We have carefully tracked patient numbers since the helipad opened over two years ago and we anticipate up to two night time landings per week as a result of this development.

“These are patients whose transfer to King’s may have taken up to two hours previously.”

He went on to say: “The latest provision will keep the King’s Trauma Centre and SELKaM as the top-performing trauma service in the country.

“I am proud that the speciality of oral and maxillofacial surgery took such a leading role in realising the provision of a major trauma service for the UK.”