Local artist Lionel Stanhope and his assistant spray-painted the mural over the course of four days. 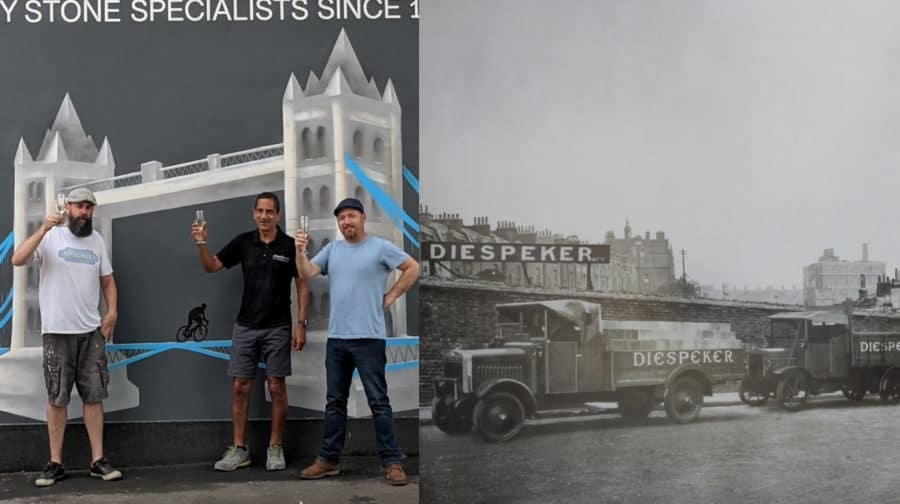 A new mural has been painted in South Bermondsey commemorating 140 years of stone work in the area.

Well-known local street artist Lionel Stanhope, who has painted several murals across south-east London, made this latest artwork for Diespeker & Co on Penarth Street at the end of June.

Family-run business Diespeker is celebrating 140 years as a supplier of stone products like marble and granite. The new mural, which is thirteen metres wide and five and a half metres tall, shows scenes from the company’s history. These include marble quarries in Italy, transportation lorries and the original headquarters in Islington. Part of the design was based on a photo from 1932. 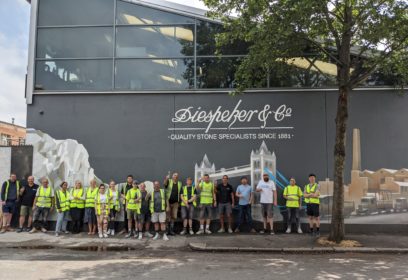 Lionel and his assistant spray-painted the mural over the course of four days. He said he was happy with the way the different elements in the picture work together.

“I think the design is really balanced so it works well in this space, and it has been really satisfying doing something on this big scale.”

Diespeker’s managing director John Krause is also shown riding his bike to work across Tower Bridge. John, whose father ran the business before him, said: “We’re really proud of our heritage as a business, and the mural describes it perfectly. It’s the story behind our 140 years that Lionel has captured so well, our roots in London and the original Diespeker signage skilfully incorporated into the new design.

“For me, the mural really brings the whole thing full circle from early beginnings to where we are now. It feels very special to have our own memorable and permanent physical representation of Diespeker’s presence in south London.”

Lionel, who has worked on sets for the TV show Black Mirror and Hollywood films, painted a mural for Millwall fans on Zampa Road last year after Network Rail covered over an iconic painting of Neil Harris, thinking it was graffiti.