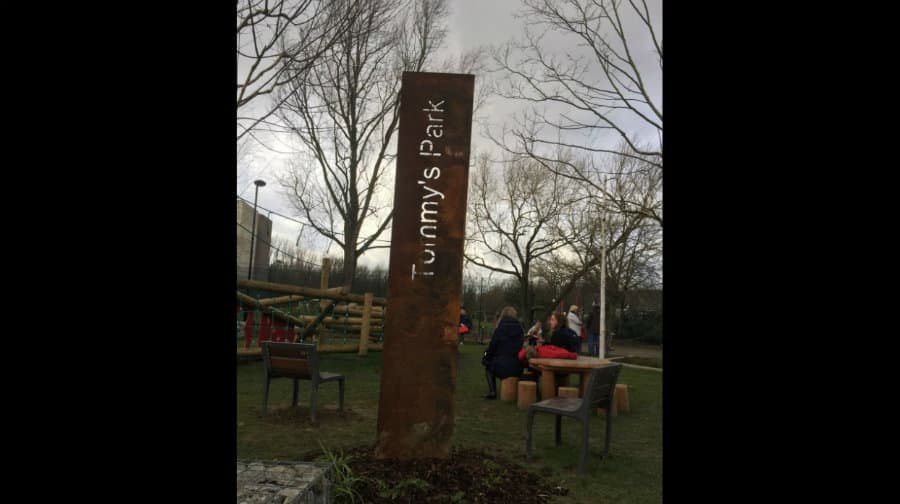 A Rotherhithe park has been named after Tommy Blackmore, the 20-year-old Bermondsey boy who was killed in an unprovoked attack outside a nightclub in June.

His brother Bradley visited the newly-created “Tommy’s Park”, located outside the main entrance Redriff Primary School, where Tommy attended as a pupil, earlier this week with his children.

He told the News: “It is really nice, the kids absolutely loved it. It’s great to have somewhere where they can go and play and we can remember Tommy. It could be here for 20 or 30 years or even longer.

“Tommy was a great uncle to them. He always did the school runs, he said the kids were his pick-me-up. If he was ever stressed, he would play with them. He said they helped clear his head. It is a shame how much they are missing out now. But they will never forget him and the park will help that.”

The park was created by developers Barratt, who were working with Redriff Primary School, where Tommy is still fondly remembered by staff.

Headmaster Mickey Kelly said: “After Tommy died we wanted to do something to remember him. He was a fantastic boy: cheeky, irreverent, the funniest fella you will ever meet.

“He kept us on our toes but he was a great kid – extremely playful. When children are playing in the park I want them to ask who Tommy was. They’ll know that he was a kid, who played just like them.”

Tommy died in June when convicted drug dealer Lloyd Smythe, 29, from the Tabard Gardens Estate, Borough, delivered a “boxing jab” to the head outside Mono Lounge nightclub near Tower Bridge on June 12.