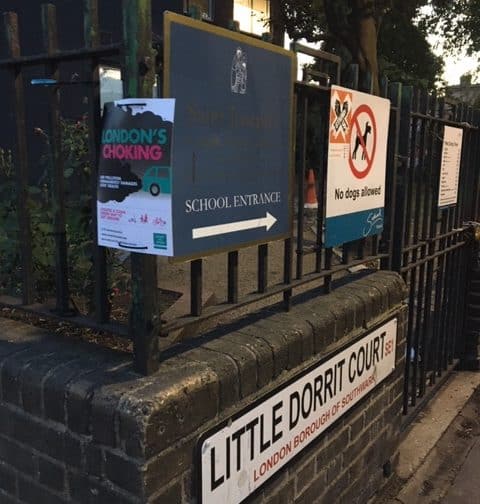 A “guerrilla” campaign has seen posters pop up around Southwark to warn parents and children of the health risks of air pollution, writes Kit Heren…

The campaign, organised by London air quality campaigners Mums for Lungs, aims to encourage people to walk or cycle more when schools reopen for the new term in September, instead of using cars.

More than 1,100 posters are being put up this week across 20 London boroughs, with Southwark among them.

Posters, which feature slogans like “London’s Choking” and “Think Outside the Box” have gone up on Coin Street and Little Dorrit Court, among other locations.

Mums for Lungs, who were founded in 2017, say that their surveys suggest that some parents are already choosing not to use their cars. They add that they are campaigning for more measures to encourage people to drive less, like cycle lanes.

Jane Dutton of Mums for Lungs said: “Half of air pollution in London is from traffic, and air pollution is severely and irreversibly damaging children’s health. We have suggested to Government that they run a public health campaign many times – as they are not doing it, we are trying our best to help people realise the way they travel has an impact.”

Campaigners believe the new initiative is timely. Research from April suggested a link between high air pollution and coronavirus deaths in England.

Serious health conditions like asthma, heart and lung disease, stroke, miscarriage and dementia can also be made worse by air pollution. Between 28,000 and 36,000 deaths a year can be attributed to long-term exposure, according to Public Health England.

Ms Dutton added: “Now, more than ever, with possible links between air pollution and Covid-19 transmission, we all need to make sure our travel choices are as non-polluting as possible.”