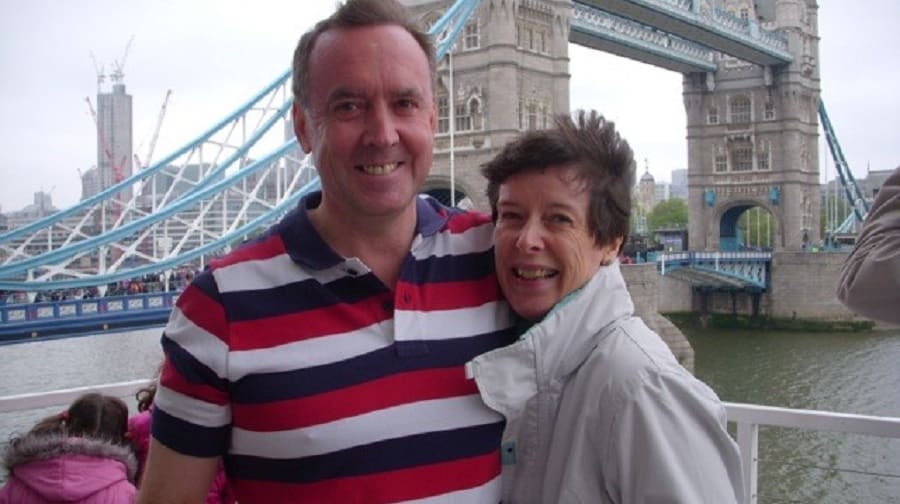 A new study into a ‘forgotten’ cancer that kills fifteen people every day is looking to recruit 400 patients affected by the disease.

The Roberts Study, launched by Guy’s and St Thomas’ NHS Foundation Trust, will investigate how different lifestyle factors, such as how much patients exercise, impact health professionals’ ability to treat bladder cancer.

The study is named after Graham Roberts who died of bladder cancer in July 2016 at the age of 58 following 20 months of treatment led by Dr Simon Chowdhury from Guy’s Hospital.

Graham and his wife Dianne Roberts donated £1.79million over five years to the Translational Oncology and Urology Research (TOUR) team at King’s College London and Guy’s and St Thomas’.

Dianne, 59, from Belgravia, said: “Funding bladder cancer research is the only way to ensure other people don’t have to go through what Graham and I did.

“It is about making a difference to other people’s lives.

“I am incredibly proud that such an important and exciting piece of research carries our name which helps to keep Graham’s memory alive.”

There were 5,400 deaths from bladder cancer in 2016 but it receives less than one per cent of cancer research spend in the UK.

Guy’s and St Thomas’ NHS Foundation Trust plans to recruit 400 patients for the study in the next five years.

The Roberts Study is for patients who have been newly diagnosed with bladder cancer or have a recurrence of the disease.

The study is one of the first in the UK to use the Trials within Cohorts (TwiCs) design for cancer research – allowing scientists conducting lifestyle research to replicate the placebo control effect used in drug trials.

Read next: Paul O’Grady thanks Guy’s and St Thomas’ doctor for care he received after heart attack

It will collect blood and urine samples as well as baseline information from a questionnaire, which will be repeated every twelve months to track any changes.

This will include data on a patient’s quality of life, fatigue, diet and physical activity. When signing up to the overall study, patients consent to be part of possible future trials.

Their work includes the creation of a new bladder cancer biobank, alongside a parallel research programme which will increase the number of patients being treated in clinical trials.

Explaining how the TwiCs design works, Dr Mieke Van Hemelrijck, senior lecturer in cancer epidemiology and academic lead of the TOUR team at King’s College London, said: “If you were to enrol people in an exercise trial and tell them they were the group who weren’t going to do any exercise, it might actually make them think of doing more exercise.

“In this study, if we develop an exercise trial for bladder cancer patients, we will only contact those who will get the intervention.

“So the ‘control’ arm – the arm that receives standard care – will never know they are the control arm of the trial. This helps to isolate the effect of the intervention.”

The top three symptoms to look out for are: blood in your urine, urgent and frequent urges to urinate and urinary infections that do not clear up.

For more information about how to support cancer care and research at Guy’s and St Thomas’ go to www.supportgstt.org.uk/cancer.