The former London Underground worker received a BEM from the Queen 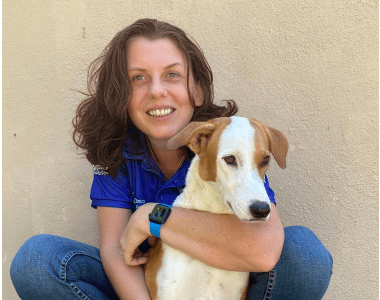 A Peckham-born former tube worker has received a gong in the New Year’s Honours List for services to animal welfare.

Samantha Green was given the British Empire Medal (BEM) in recognition of her dedication to helping animals in Sri Lanka.

It’s not the first time she has featured in the News – In 2013 we reported that Samantha, the founder of Dogstar Foundation, had been shortlisted for the Ceva Animal Welfare Awards for her work.

Sam, who grew up in Peckham, found herself in Sri Lanka while recovering from the trauma of the 7/7 London terror attack.

On July 7, 2005, Sam – who had worked for London Underground since the age of sixteen – was responsible for leading a specialist team of engineers helping police access the underground tunnels in the days after the blasts; a harrowing experience.

Under a year later she was made redundant due to budget cuts and decided to take some time out on a trip overseas.

While in Sri Lanka in 2006, Sam asked her husband Mark to send out parasite treatments for unwell dogs she had seen suffering.

One encounter with a dog riddled with mange was pivotal, and by 2013 she and her partner had relocated to Sri Lanka to run the newly set up Dogstar Foundation full time.

Their work has continued despite terrorist attacks in April 2019 and the ongoing challenges of COVID-19.

Dogstar Foundation has now sterilised over 49,0000 dogs and cats, completed over 67,000 Rabies vaccinations and treated many dogs for illness and injury.

“I was totally and utterly gobsmacked and it took a few days to really sink in,” said Sam, of the award. “I am truly honoured and humbled to receive recognition  for the work I do as part of a wider team who are as passionate about animal welfare as I am.

“It’s a brilliant uplifting start to 2021 especially after the numerous challenges of the last few years.”